•During the game played in Moroni on November 15, 2020, reports emerged four Harambee Stars players would miss the match after the Comoros Federation claimed they had returned positive results hours before the match kicked off. 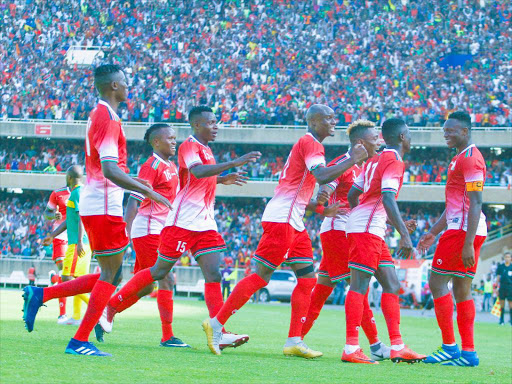 Harambee Stars players celebrate their third goal against Ethiopia in a past qualifying match
Image: /FILE

Harambee Stars have qualified for the 2020 Afcon after Confederations of African Football banned Comoros for allegedly falsifying a Covid-19 report that claimed Kenyan players were positive.

Caf secretary general, Véron Mosengo-Omba, communicated the decision on Wednesday afternoon, a day after Football Kenya Federation president Nick Mwendwa raised an alarm that the issue had gained root in the competition.

During the game, played in Moroni on November 15, 2020, reports emerged that four Harambee Stars players would miss the match after the Comoros federation claimed they had returned positive results hours before kick-off.

Caf said they had conclusively found out that the doctors who conducted the tests erred in their judgement hence decided to award Harambee Stars three points from the subsequent match with Comoros effectively relinquishing points earlier awarded.

Otieno said they had sensed a well-calculated move to lock out key Kenyan players from the match.

The decision has left Kenya second on the final standings with 10 points, two behind leaders Egypt. Comoros are now third on six points while Togo are last on two points.

It was the first of two times that Harambee Stars were being subjected to the ordeal as four key Kenyan players were ruled out of the African Cup of Nations qualifier match against Togo in Lome on Monday, where Kenya stunned the host nation 2-1 with goals from Abdalla Hassan and Masud Juma.