•The partnership will see the firm pump a whopping Sh5 million into three international friendlies as well as the remaining two African Cup of Nations qualifiers.

•Odibet CEO Dedan Mungai said the firm was committed to providing assistance to the team and walking with them through thick and thin. The partnership will see the firm pump a whopping Sh5 million into three international friendlies as well as the remaining two African Cup of Nations qualifiers.

Twenty four  local- based players pitched camp on Monday last week to gather sufficient ammunition ahead of the 2021 Africa Cup of Nations qualifiers against Egypt and Togo later this month. Their foreign-based counterparts are expected in the country at a later date.

Harambee Stars will settle scores with South Sudan in their first friendly on March 13 before playing host to Tanzania on March 15, 2021 and March 18, 2021, in Nairobi.

They will next flex muscles with Egypt in Nairobi on March 22, before they hit the road to Togo on March 30 for the final qualifying rounds of the 2020 Africa Cup of Nations.

FKF President Nick Mwendwa said he hopes the friendly matches would be enough to prepare the team effectively for the task ahead. "By the time we are playing Egypt, our players will have featured in three matches."

Mwendwa thanked Odibets for holding the team's hand throughout their chequered journey that saw them register a lackadaisical performance against Comoros.

"Odibet will walk with the team and provide all the little things including dinners and video clips and if the team win, they will always get a cash motivation," added Mwendwa.

He said he is happy that he has a technical bench comprising all local tacticians. "I'm happy that I have a Kenyan driven bench and I pray for their success," said Mwendwa.

Coach Jacob 'Ghost' Mulee promised Kenyans better results this time round, saying the team's last engagement came at a time the squad was full of rusty players given the local league had been halted due to the outbreak of Covid-19.

"It's the second time Odibet is coming to support us. Last time, they chipped in but we didn't return the desired results. We promise to make amends in our next assignments," said Mulee.

"The last time we played Comoros and lost our league was not on. At least our league is now on and our players have had enough exposure from their matches. I believe the three friendly matches will sharpen them even better," added Mulee.

Skipper Kenneth Muguna equally promised satisfactory results against Togo and Egypt. "This is a good initiative that will he of great help to the players. We are hoping to deliver good results because the motivation is good and as players we now have a good environment to work in," said Muguna.

Odibet CEO Dedan Mungai said the firm was committed to providing assistance to the team and walking with them through thick and thin. He appealed to local fans to exercise patience.

"Let's learn to be kind to the team regardless of the performance. When things don't go according to expectations, let's still be there for the team," said Mungai.

Kenya are third in Group G with three points, two adrift of leaders Comoros who tie at the summit with Egypt with a similar goal difference. Togo are last having collected a solitary point from their three matches. 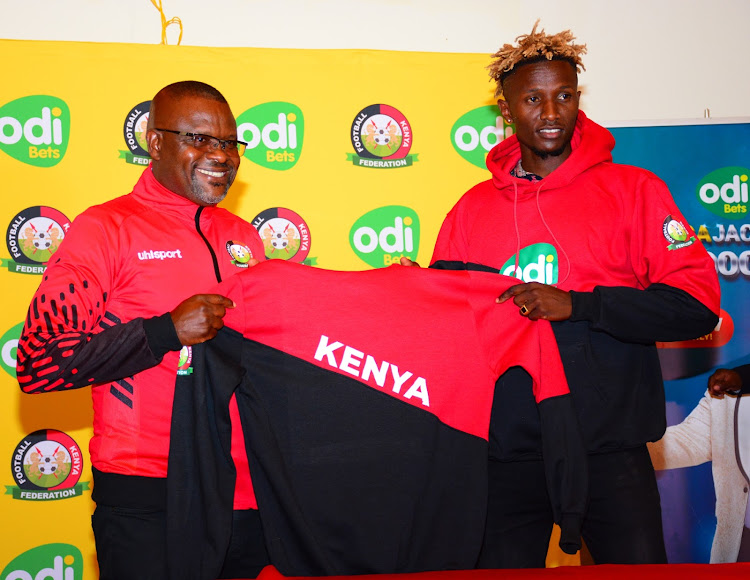