Stars up training ahead of friendlies and afcon qualifiers

•Wazito trio of Peter Odhiambo, Johnstone Omurwa and Kevin Kimani where, however, missing alongside Gor Mahia duo of Kenneth Muguna and John Macharia.

•Nairobi City Stars’ Oliver Maloba missed the programme due to club assignments in the Premier League while Gor’s Benson Omalla is out on school assignments. 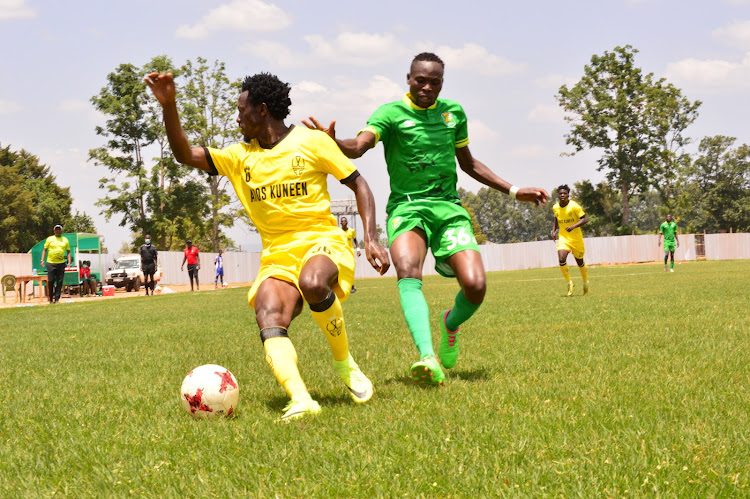 Wazito's Kevin Kimani vies for the ball against Dominic Ouma of Kericho Zoo on Monday at Bukhungu Stadium in Kakamega
Image: CALISTUS LUCHETU

Preparations ahead of the upcoming three friendlies and 2021 Afcon qualifier back-to-back matches against Egypt and Togo in March have been taken a notch higher as home-based players called up for duty with Harambee Stars assembled for a second week.

Nairobi City Stars’ Oliver Maloba missed the programme due to club assignments in the Premier League while Gor’s Benson Omalla is out on school assignments.

The players settled in at camp on Sunday and were due to leave yesterday allowing them to report to their respective clubs on today.

Stars will play South Sudan in their first friendly on March 13 before hosting Tanzania in back-to-back matches on March 15 and March 18 in Nairobi.

The team will then host Egypt on March 22 before traveling to Togo for the 2020 Africa Cup of Nations final qualifying rounds on March 30. These matches will be used as build-up matches towards the upcoming 2022 Fifa World Cup Qualifiers that get underway in June 2021.