Gor Mahia back in action as FKF-PL enters round 14

•The last time Gor took to the pitch was against AFC Leopards who held them to a barren draw.

•K'Ogalo are ninth with 16 points and could jump to seventh if they overcome Nzoia who are thirteenth on 14 points. 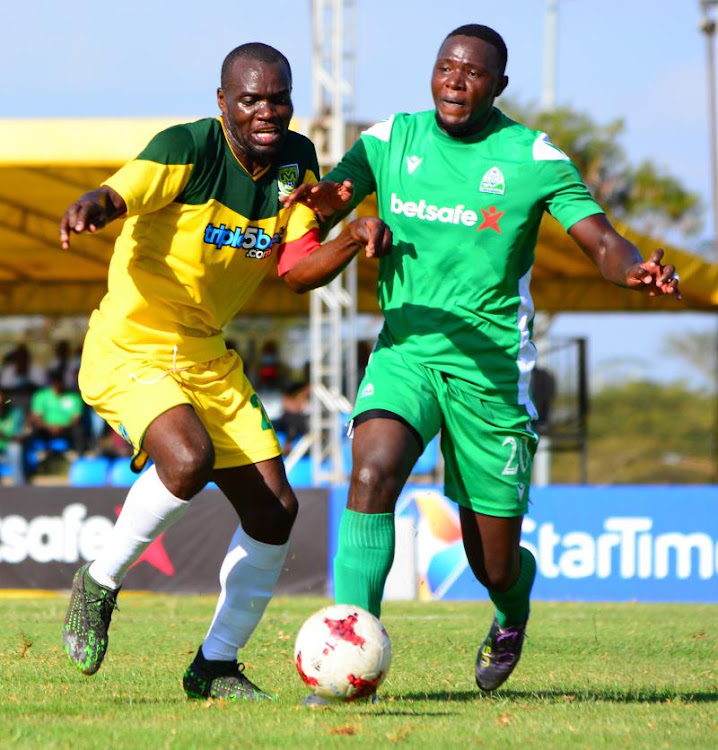 Defending champions Gor Mahia will be hoping to put aside last Sunday's disappointing continental outing against Napsa when they  face Nzoia in their next Football Kenya Federation (FKF) Premier League fixture at Mumias Complex on Saturday.

The last time Gor took to the pitch was against AFC Leopards who held them to a barren draw. They currently occupy an unfamiliar position on the log and a win over the millers could propel them to a more decent slot and boost their chances of reclaiming the title.

K'Ogalo are ninth with 16 points and could jump to seventh if they overcome Nzoia who are 13th on 14 points.

Leaders Tusker will be keen to stretch the gap between them and second-placed KCB even further when they play away to Bidco at Moi Stadium, Kasarani.

The brewers sit unperturbed at the summit of the log on 32 points, six clear of the bankers who have a date with Kariobangi Sharks at the same venue the following day.

KCB's fixture against Sharks won't be an easy affair either. The side boasts of having this season's leading scorer Eric Kapaito in their ranks and currently lie fifth on the log with 21 points. Sharks could climb up one spot past Bandari if they happen to collect maximum points.

That notwithstanding, Zedekiah Otieno's charges can only hope for positive results if they are to keep their title dreams alive  after kicking off the season on a high.

It will be interesting to see how the contest between competition minnows Vihiga United and Western Stima develops. Both sides have literally been limping in their matches and sit precariously in the relegation zone at 16th and 17th with nine and seven points respectively.

On Sunday, struggling Posta Rangers host Sofapaka at Moi Stadium, Kasarani. Sofapaka are 11th on 15 points and a win could propel them to seventh.

On the other hand, Rangers languish at the bottom end of the table in 14th on 10 points and even a win cannot improve their position given Nzoia are above them with four points.

AFC Leopards face a huge task against hosts Kakamega Homeboyz at Bukhungu Stadium. Ingwe will enter into the match as favourites, coming off a hard-fought 1-0 win over Ulinzi Stars at Kasarani on Wednesday.

A win for Leopards who are third will only serve to narrow the gap between them and KCB, given the bankers are four points clear.

They could, however, drop one spot below if Bandari secure a win over Ulinzi at Kericho Green Stadium on the same day.

Wazito FC face Zoo FC at Bukhungu Stadium in one of the fixtures planned for Monday when Nairobi City Stars host Mathare United FC at Kasarani.

Zoo, who are still on the trailing with three points, managed to secure a point in their last fixture against Homeboyz and might put up a spirited fight as they seek to battle their way out of imminent relegation. The 2019/2020 season runners-up Homeboyz are 12th on 15 points.

The rescheduled match between Homeboyz and Gor Mahia will now be held on Wednesday.