Juma’s ability to read the game and impeccable partnership with other center-backs has made him one of the most sought-after central defenders in the country.

•As proof of his ability, he was among the thirteen players recently signed by Kenyan Premier League reigning champions, Gor Mahia, where he is expected to fill the void left by Joash Onyango, who signed for Tanzania giants Simba SC this year.

• His best KPL match was when he turned out for Mathare United against Sony at Awendo Green Stadium in a closely contested tie that ended 3-2 in favour of the Slum Boys. 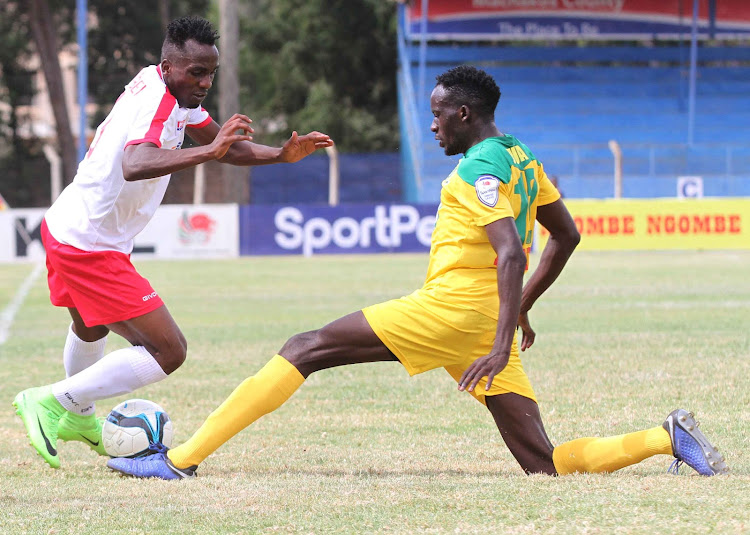 When Harambee Stars’ head coach Francis Kimanzi named a 34-man provisional squad for the upcoming friendly match against Zambia, it wasn’t surprising that the lanky Andrew Juma was among the selected defenders.

The Stars’ tactician will soon be testing  his mettle on the highly rated Chipolopolo at the Moi International Sports Complex Karasani and Juma will be central to the success of his defence.

Juma’s ability to read the game and impeccable partnership with other center-backs has made him one of the most sought-after central defenders in the country.

As proof of his ability, he was among the thirteen players recently signed by Kenyan Premier League reigning champions, Gor Mahia, where he is expected to fill the void left by Joash Onyango, who signed for Tanzania giants Simba SC this year.

Born on August 7, 1994, in Pumwani, Nairobi, Juma was nine when he took to playing football, linking up with a development side called Scarlet in the Mathare Youth Sports Association (MYSA)-organised league in Dandora.

There, he cut his teeth in the sport under the watchful eye of youth coach namesake Antony Juma.

At the age of 12, he grabbed his first silverware after Scarlet clinched the MYSA Dandora Zone league.

After sitting for his Kenya Certificate of Primary Education (KCPE) exams in 2008, Juma proceeded to join Jogoo Road High School in Nairobi’s Eastlands area where his skills in football became evident.

He was in Form One when the school team secured a third-place finish in the county edition of the Kenya Secondary Schools Ball Games after being eliminated by eventual winners Upper Hill in the semifinals.

Juma plied his trade for Dandora Youth in the Nairobi County League for five years before the opportunity to join Mathare United in the country’s top flight league came begging.

He narrates how he ended up at the Slum Boys: “I had gone to try out for Posta Rangers and the trials were on when I received a call from one of MYSA staff members who told me that Mathare United coach Francis Kimanzi was interested in my services.”

“I immediately left midway through the Posta Rangers trials and quickly made way to the Goan Institute ground, where the Slum Boys were training. I met Kimanzi who offered me a deal after some talk.”

Juma has been one of the longest-serving Mathare United players, having only made a move to Gor Mahia this year after joining the Slum Boys in 2016.

His best KPL match was when he turned out for Mathare United against Sony at Awendo Green Stadium in a closely contested tie that ended 3-2 in favour of the Slum Boys.

“It was an end-to-end thriller. We would come back and equalise each time our opponents took the lead. We finally won the match,” says Juma.

Mathare United came from a goal down twice to beat Sony and move up to second on the Kenyan Premier League log.

The Slum Boys got their goals through Chrispin Oduor, Daniel Otieno and Klinsman Omulanga, with Daniel Onyango and Salim Chacha netting for Sony.

Juma would, however, quickly wish to put behind him the humiliation they suffered in the hands of Sofapaka during a 2018/19 KPL season match at Moi Stadium, Kasarani where they crashed 1-4.

He has so far received three national team call-ups and fondly relives his first international assignment against Zanzibar during the 2019 Cecafa Senior Challenge Championships at the KCCA Lugogo Stadium in Kampala, Uganda as his best ever.

Harambee Stars sealed a win from Oscar Wamalwa’s lone goal in the second half to beat Zanzibar Heroes 1-0, finishing at the top of Group ‘B’ on nine points.

“It was my first international experience and we kept a clean sheet by beating edging Zanzibar 1-0,” says Juma.

Juma says he admires quite a number of local players from whom he has always drawn immense inspiration. They include former international players Jerry Santo, who currently serves as an official at the Kenya Footballers Welfare Association and George ‘Wise’ Owino.

Despite his stellar career spanning close to a decade, Owino a former Harambee Stars defender bowed out in disgrace after being slapped with a 10-year ban by the world football governing body Fifa on allegations of match-fixing. He was also asked to pay a Sh1.5m fine.

The decision meant that he couldn’t take part in any kind of football-related activity at both national and international level for a period of 10 years.

On the international front, Juma has always been motivated by Rio Ferdinand, former England and Manchester United centre-back.

Ferdinand currently works as a television pundit for BT Sport. He played 81 times for England between 1997 and 2011, and was a member of three Fifa World Cup squads.

Juma says he has also learnt many significant lessons from Brazil and Chelsea defender Thiago Silva.

Juma appreciates his parents Fredrick Omondi and Julian Akinyi whom he says played a big role in his successful voyage in football.

“My father encouraged me a lot while my mother would buy me soccer boots anytime I needed them,” says Juma.

He spends his free time with family and friends, mostly prefers staying indoors.

He is the first born and the only boy in a family of three and dots on his sisters Joan Aluoch and Iddah Achieng. He  says he has come to regard his cousin, Nelson Mandela, as a real brother, having been with him from the time he was a toddler.

Juma would one day like to don the yellow jersey of South Africa Premier League champions Mamelodi Sundowns.

“Upcoming footballers should cultivate self-belief and pray in all situations because it’s only God who can make things happen,” says Juma.