Under the partnership, each of the 32 Division One clubs drawn from Zone 'A' and 'B' will be entitled to at least Sh 500,000 annual gran

•Last week, FKF announced that clubs which ply their trade in the elite league will be pocketing at least 8 million per year from the Nigerian based betting firm 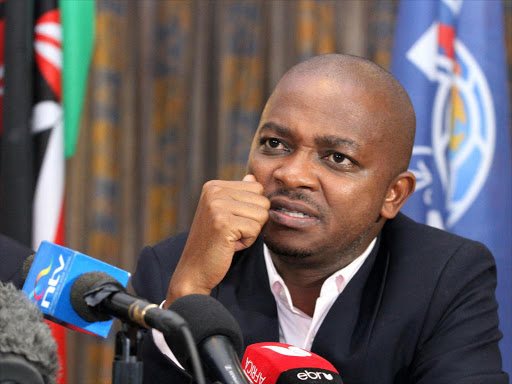 Hardly six days after securing a Sh1.2 billion five-year deal for the country’s top flight competition, Football Kenya Federation yesterday  gave the Division One League clubs something to smile about after announcing that Betking will also sponsor the third tier to a tune of Sh100 million for the next five years.

Under the partnership, according to FKF, each of the 32 clubs drawn from Zone 'A' and 'B' will be entitled to at least Sh500,000 annual grant. The official unveiling of the partner, as well as the logos, is set for September.

Last week, FKF announced that clubs which ply their trade in the top flight league will be pocketing at least Sh8 million per year from the Nigeria-based betting firm.

FKF President Nick Mwendwa said the new deal with the third tier signaled that the value of Kenyan football was on the rise.

“This is the first time in the history of Kenyan football that the Division One league has attracted a sponsor and so we are happy to announce yet another milestone as we endeavour to raise Kenyan football’s commercial value,” said Mwendwa.

Mwendwa, who is gunning to retain his seat for another four years, observed that the financial boost will increase competition in the league. Winners from either zones book a place in the National Super League.

“We believe this deal, which further underpins BetKing’s role in football, both at the national and grassroot level will not only help ease our clubs’ financial obligations but also play a pivotal role in raising the level of competition,” he added.

Zoo Youth head coach Shem Ondieki believes the finances will boost their chances of making it to the second tier. Zoo, who topped the league before coronavirus disrupted its flow, were on the verge of promotion but were left ruing the decision by FKF to use the first leg results to determine promotion and relegation.

Soy United were promoted at their expense.

“The money will go a long way in boosting our chances of getting promotion to the NSL. We nearly made it last season without a sponsor. But with at least something trickling into our accounts, then it will be easier to ask my players for one hundred percent. Third tier clubs struggle to pay officials and book venues and I think we have gotten a solution,” said the former FC Talanta assistant coach.