Shikobe: Why guiding Starlets to Cecafa title is just the beginning

Starlets upset Tanzania’s Kilimanjaro Queens 2-0 at the Chamazi Stadium in Dar es Saalam after romping to the finals on the back of an unbeaten run and without a goal conceded.

• Born and raised in Kakamega County in a family of 10 (five boys and five girls), Shikobe developed a keen interest in football at the tender age of 10 when she was a pupil at Emulunya Primary School in Kakamega County.

• 2015 offered her more opportunities as she received a national team call-up after coach David Ouma spotted her talent during a league match against Matuu. 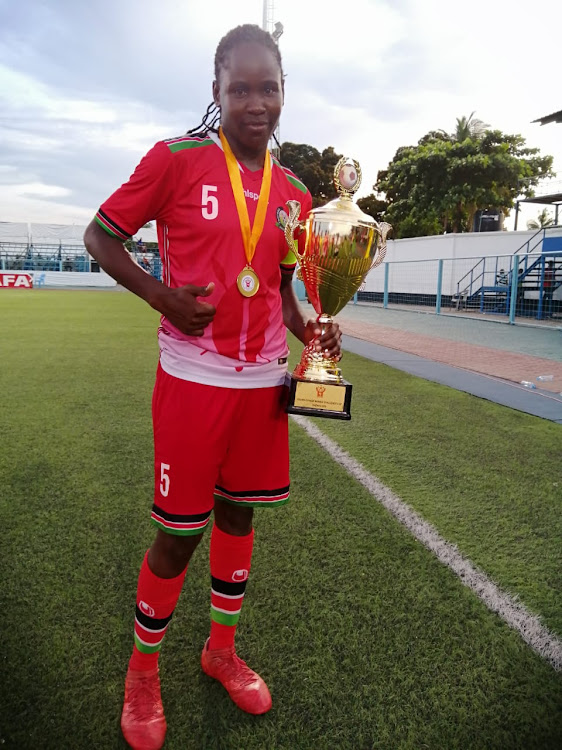 The 29-year-old, Starlets' captain who stands at 5’6, hoisted the trophy well above her head with pride and honour as the entire nation joined her teammates in wild celebrations, on a day that Kenya wrote a new chapter in its football history, this being the first time ever that the women’s team bagged a regional trophy.

Starlets upset Tanzania’s Kilimanjaro Queens 2-0 at the Chamazi Stadium in Dar- salaam after romping to the finals on the back of an unbeaten run and without a goal conceded.

They finished at the summit of Group ‘B’ with nine points, having registering easy wins against Ethiopia (2-0), Djibouti (12-0) and Uganda (3-0) before they eventually walloped a hapless Burundian team 5-0 in the semis.

As this was happening, Shikobe, the captain, boldly led the onslaught from the front.

Born and raised in Kakamega County in a family of 10 (five boys and five girls), Shikobe developed a keen interest in football at the tender age of 10 when she was a pupil at Emulunya Primary School in Kakamega County.

“Everyday after school, I would join boys at the neighbourhood to play football. Since we could not afford a real standard ball, we would make one out of crumpled plastic bags and twine,” said Shikobe.

She says she owes a lot to her mother, Mary Christine Afwande, who played a big role in her success story. Mary, who won several titles herself as a netball player, would always encourage her daughter to go out and play.

“My mother has encouraged me to pursue football. I keep her posted on my activities. She always prays to shield me from injuries,” said Shikobe.

Shikobe sat for her KCPE examinations in 2008 and proceeded to Kilingili Secondary, where she developed further interest for the game of football. It was during that period that her career in top flight football started buzzing.

She was drafted by Western Commandos for her first assignments in the Kenya Women’s Premier League, where she featured as a striker. It wasn’t long though, before she was lured into joining Thika Queens.

2015 offered her more opportunities as she received a national team call-up after coach David Ouma spotted her talent during a league match against Matuu.

“In Thika, I was spotted during a match against Matuu Memorial. It was a tough game at that time given that Matuu were the strongest team in the women’s Premier League,” says Shikobe.

The call-up to the national team was not surprising though, considering the fact that her exploits on the pitch had already secured her a slot as a first team player at Thika Queens, where she was at one time unanimously voted as the team’s best player.

She maintained an impressive performance in the league which brought Oserian scouts right to her doorsteps with deal at hand. They ultimately recruited her in 2015, marking another landmark in her glittering career.

Shikobe, however, says that her journey with the national team has not always been rosy. It took a lot of persistence on her part to secure a permanent slot.

“Before I finally became a regular in the national team, I had been called up and dropped many times,” she says.

It was hardly long though before her technical and tactical abilities prodded the conscience of the national team coaches to hand her a regular slot in the national team. Her strengths on the pitch which include shielding, heading and tackling abilities made the coach to construct the team’s defence around her.

“Although competition at the national team was very stiff, this made me work even harder. I have always held on to the belief that nothing can stop you from getting what you want if you pursue it tirelessly,” Shikobe observes.

She says that her moment of pride and glory came when she lifted the Cecafa trophy, adding that the historical feat boosted her confidence as a captain and enhanced the trust her teammates had in her as a leader.

“The Cecafa win made me believe in my qualities as a leader. Being the first Starlets' captain to lift the Cecafa trophy speaks volumes,” she says.

It was the first time that Kenya clinched the main trophy since Cecafa Women’s Senior Challenge Cup tournament started— their best position ever having been runners-up in the 2015 Uganda edition.

“The win defines my happiest moment as a player. Bringing home the trophy for the first time in the history of our country is the best feeling in my career so far. Many went before us but failed. We lifted it with class, maintaining an unbeaten run throughout the tournament,” says Shikobe.

She has, however, experienced her lowest moments too. The worst of them was when Harambee Starlets stumbled out of the 2020 Tokyo Olympic qualifiers after going down 3-2 on aggregate to Zambia’s Shepolopolo.

“We were very confident of getting positive results in Lusaka after our 2-2 first-leg draw in Nairobi, but our plans fell apart,” she remembers.

Shikobe said that her most difficult match was when they faced Nigeria Super Falcons in the Africa Cup of Nations campaign. The West Africans handed Starlets a heavy 4-0 thrashing.

Starlets booked a place in the fourth round after upsetting hot favourites Ghana with a 1-0 win in Nairobi after holding them to a barren draw in Accra.

Earlier, Starlets overcame Ethiopia, beating them 1-0 in Nairobi after forcing a 1-1 draw in their first leg encounter in Addis Ababa.

Asked to name the player that has given her the hardest time in her career so far, Shikobe said that containing Falcons’ striker, Asisat Lamina Oshoala, proved to be a difficult task, adding that she’s still scared of facing her even today.

“She is a one in a million striker, fully equipped with all the essential qualities. She is also very intelligent just like Michael Olunga,” she observes.

She, however, says that she was surprised when the Starlets management appointed her the team captain in 2019.

“I never saw it coming. I am happy the management of the team has entrusted me with the responsibility. It never crossed my mind that at one time I will ever become the captain,” she says.

Asked why she thinks she was picked out of all the players in the squad, Shikobe says her commitment might have given her an edge over her teammates.

“I think they noticed my hard work, self-discipline and total devotion to the game among other factors,” she says.

Shikobe is, however, quick to point out that the armband comes with a lot of expectations, adding that she bites the bullet for her teammates when they underperform.

“The head coach always pins me down with tough questions when the team is not getting positive results,” she reveals.

Shikobe says she and her teammates are eager to return to the pitch once the coronavirus pandemic has been contained, adding that their first task will be to take Kenya to the Africa Women’s Cup of Nations (AWCON).

“My priority as the captain is to guide the national team to AWCON. The Covid-19 pandemic has not stopped us from keeping in touch. We constantly follow up on individual training routines to keep fit,” she says.

The Starlets’ last performance before the outbreak of Covid-19 was in Turkey where they secured a third-place finish in the Turkish women tournament. Starlets collected a 2-0 victory over Northern Ireland but fell to Chile and Ghana.

Locally, Shikobe plies her trade for Naivasha-based side Oserian Ladies in the Women’s Premier League. She, however, has sights on playing professional football in either Europe or South Africa.

“My ultimate dream is to feature for top flight clubs in countries with well-rooted leagues,” she says.

“She’s a very disciplined and determined player as well as a leader,” says Juma.

Her sentiments are echoed by the Starlets team manager Beldine Odemba who says that Shikobe is one player who is always ready to travel that extra mile.

“Dorcas is one of the most dedicated players, a role model, a team player and a natural leader. Always ready to go an extra mile and steer the team to greater heights,” says Odemba.