Musa spoilt for choice as over five chase his signature

•Musa, joined Nkana in July 2018 after parting ways with Albanian outfit FK Tirana and the Lang'ata High School alumnus has revealed that his services are on demand if the offers made to his agent are something to go by

• He also said that Nkana who are based in Kitwe had shown interests in retaining him after the club launched negotiations in a bid to renew his stay four months ago. Apart from the two clubs, Musa said four more clubs had approached his agent. 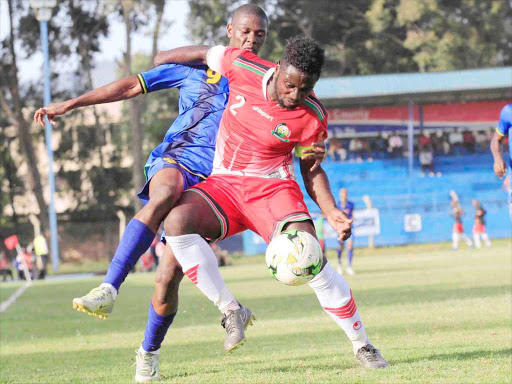 With just a month remaining on his contract with former Zambian champions Nkana FC, former Gor Mahia and Harambee Stars centre-half Musa Mohammed is spoilt for choice with over five clubs eyeing his signature.

The Lang'ata High School alumnus has revealed that his services are on-demand if the offers made to his agent are anything to go by.

The battle-hardened defender,  who returned home owing to the coronavirus pandemic, disclosed that record Tanzanian champions Yanga lead the list of clubs chasing his signature.

Yanga have in the recent past dominated headlines reporting that the defender was on the verge of signing for them.

He also said that Nkana, who are based in Kitwe, had shown interest in retaining him after the club launched negotiations in a bid to renew his stay four months ago. Apart from the two clubs, Musa said four others had approached his agent.

The league winning defender with Gor said he will carefully consider all the offers lying on his table, with the highest bidder likely to carry the day.

"I have a month remaining on my contract with Nkana and offers are flying all over. The club initiated talks four months ago but I am yet to make up my mind. My agent has also informed me that Yanga are interested in me and so are four more clubs. Football is business like any other and I will go through all bids and make a decision depending on the offers and the best interest of my career," he said.

In the meantime, Musa described his stay in Kitwe as superb having established himself as a regular starter at the club before being handed the armband following the exit of Walter Bwalya who joined Egyptian side, El Gouna SC in July last year.

" I am happy with what I have achieved at Nkana for the two years I have been with them. I have won individual accolades and earned the trust of the technical bench and fans. Through hard work, I managed to break to the starting team and was later handed the armband. It has always been an honour to skipper the club," he stated.

With all sporting activities in the country suspended, Musa says training from the comfort of his house has helped him remain fit even as he seeks to make a decision in the coming days.

" I have been training at home even though it's not as good as practising as a unit. It has helped me keep fit as we hope the pandemic fades and normalcy returns," he added.