•Out of the yearly sponsorship of Sh30million, half will go directly to clubs with the remaining half going to the federation for administration purposes.

•Mwendwa revealed that under the deal, the clubs in the NSL will receive grants of Sh750,000 annually but paid in two equal batches. 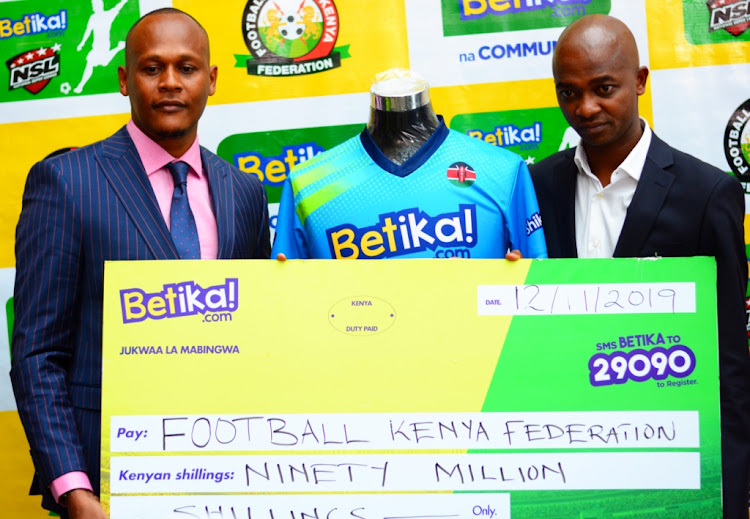 Betika's head of commercial John Mbatiah (L)presents a cheque to FKF's Nick Mwendwa during a press conference at a Nairobi Hotel on November 12,2019
Image: ERICK BARASA

For the first time in history, the second-tier football league in the country will have a title sponsor after Football Kenya Federation(FKF) sealed a three-year deal worth Sh90 million (Sh30 million per year) with betting firm Betika.

The agreement, unveiled yesterday and signed by Betika Commercial head John Mbatiah and FKF President Nick Mwendwa, will see the 20-team second division league named Betika National Super League for the duration of the partnership. Out of the yearly sponsorship of Sh30million, half will go directly to clubs with the remaining half going to the federation for administration purposes.

Mwendwa admitted that the sponsorship agreement could not have been more timely. It comes in the wake of persistent reports of financial struggles of his federation and alleged impropriety in the use of available funds.

“We are celebrating this partnership at a difficult time for football. We thank Betika for coming in at a time when the industry is in a whirlwind and clubs are suffering. This deal could not have been more timely. It is a small step in the right direction,” said Mwendwa.

Mwendwa revealed that under the deal, the clubs in the NSL will receive grants of 750,000 annually but paid in two equal batches.

“We will give the clubs their money directly so that they manage it by themselves. However we expect them to continue paying the referees as they have been doing,” stated the FKF boss.

“We believe this is the best way of running the league as the referees receive their allowances before a match. We do not want a situation where we have accruing debts for match officials at the end of the year,” he concluded.

Mbatiah, who announced the deal through the recently launched 'Betika Na Community Initiative' said the partnership confirms their commitment to investing in the community through sports, arts, and culture with football being a key focus.

“Through this, we aim to improve the standards of the game as we nurture talent both at the grassroots and national level,” he said.

“We also believe we can influence positive change among the youth through creating an atmosphere of talents and skills development in sports. These are the same players who will hopefully, steer Kenya to qualify for the 2022 World Cup,” added Mbatiah.

The first instalment of the Sh750,000 windfalls will be available to the clubs by the end of the week. The league continues today with a full fixture schedule across the country.