•Mwendwa revealed the  federation has an agreement with a Radio station to broadcast their matches and this is likely to translate into some funds for clubs.

•Regardless of the outcome of the talks, there is no hiding place for teams that will not honour their matches according to the fixtures drawn at the start of the season. 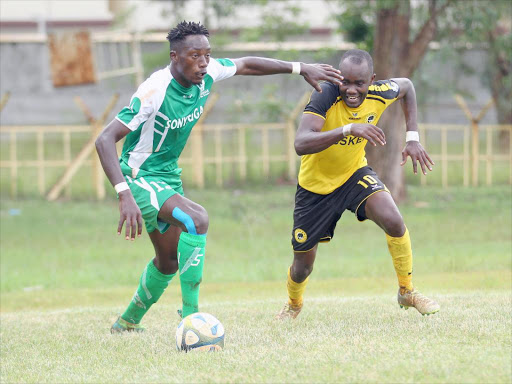 It's not all doom and gloom for the country's topflight league as Football Kenya Federation (FKF) president Nick Mwendwa revealed that they have an agreement with a Radio station to broadcast their matches and this is likely to translate into some funds for clubs.

“We are in talks with a radio station to broadcast KPL matches and if it eventually materialises we will be on a stronger footing. I believe by next year we will be in a stronger position in terms of securing sponsorshipS for the KPL,” revealed Nick.

“So I challenge club owners who feel they cannot maintain their teams to sell them to people who can. I have for many years as you all know used my personal funds to run a club(Kariobangi Sharks) so club managers should not expect the federation or any other entity to come to their aid,” he advised.

"Regardless of the outcome of the talks, there is no hiding place for teams that will not honour their matches, according to the fixtures drawn at the start of the season," Mwendwa reiterated.

Kenyan Premier League clubs have been calling for the league to be temporarily suspended due to financial constraints by some but Mwendwa maintained that matches will go on as scheduled and teams that will hand out walkovers will be dealt in accordance with the rules.

“There is no way a club can expect funds from the government or federation. Each club has its own plans and prior to the season, they indicated that they had the capacity to honour their matches for a whole year at least,” said Mwendwa.

“So the case of teams calling for the suspension of the league is null and void. Any team that forfeits three matches as per the rules and regulations will stand relegated,” he warned.

Sony Sugar are within a walkover of getting thrown out of KPL after missing their last three matches. The 2006 champions are slated to host Kisumu All-Stars this weekend and failure to honour the match will see them relegated.

Yesterday,  it emerged that Sony are likely to honour their home fixture this weekend to avert relegation. Coach James Nandwa confirmed that the sugar millers have resumed training hoping to play on Saturday.

“Yes, we have returned to training. We had 10 players in our first session and we hope to have everybody available for the weekend game.”Nandwa remarked.

Sony coach remained hopeful that the clubs financial problems that saw them handout walkovers to AFC Leopards and Tusker will soon be behind them.