Why record must fall

Kipchoge's menu at the camp didn't have luxurious foods, such as beef, chicken, sausages or french fries

Instead, rice, potatoes, porridge and beans constitute the diet of Kipchoge and company ahead of INEOS 1:59 Challenge in Vienna today.

•Kipchoge’s influence transcends the boundaries of the camp into the local environs where he attracts large crowds of onlookers whenever he joins other athletes for a run.

•According to Patrick Sang, Kipchoge’s coach, the training schedule is integral to moulding athletes into tip-top condition 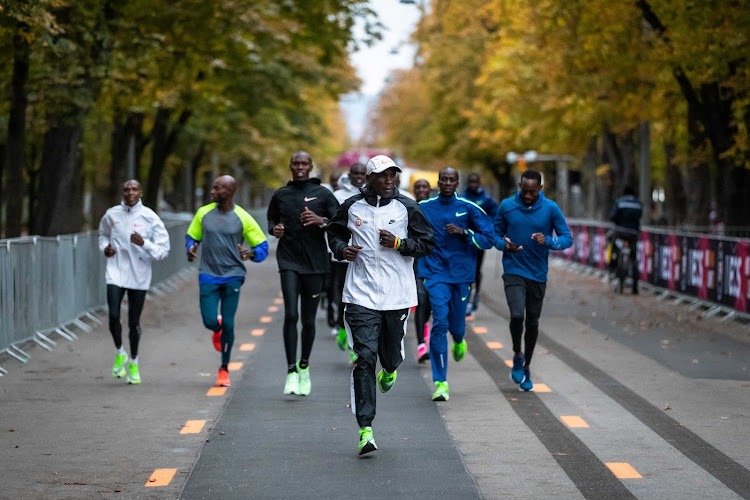 Eliud kipchoge with his pacemakers have a feel of the INEOS 1:59 Challenge in Vienna, Austria.
Image: /COURTESY

They laugh; they make fun of one another and tell stories to pass time. But beneath this aura of fun and laughter is a rigorous training schedule and a meticulous diet that forges upcoming athletes into marathon world-beaters.

Among this group of upcoming athletes at the Kaptagat training camp is Eliud Kipchoge— the man of the moment who could etch his name in marathon history books this morning by becoming the first marathoner to run 42km under two hours.

The menu at this athletes’ camp does not have luxurious and mouth-watering foods, such as beef, chicken, sausages or french fries.  Instead, rice, potatoes, porridge and beans constitute the diet of Kipchoge and company ahead of INEOS 1:59 Challenge in Vienna today.

In view of the energy-sapping training regimen that runs from Tuesday to Saturday, this diet is necessary to replenish the body with the strength that Kipchoge needs in a bid to surge towards the pinnacle of world marathon.

According to Patrick Sang, Kipchoge’s coach, the training schedule is integral to moulding athletes into tip-top condition. Thursdays and Saturdays are usually intense training days during which marathoners run for long distances and at a fast speed. “Saturdays is often a tough session, speed or fartleck. Then the cycle begins again,” Sang reveals.

Kipchoge echoes his coach’s sentiments adding that the training process in the camp is no walk in the park. After spending one month in the gym, he has been training on endurance and running in the camp. “What has changed when I came into the camp is that it is now all about speed and total endurance. It’s all about running,” Kipchoge states. Tuesdays, Wednesdays and Fridays are recovery sessions coupled with muscle exercises.

How does it feel to train with a man who is possibly the best marathoner in history? According to Augustine Choge, an athlete at the camp, Kipchoge is a humble person who is always encouraging upcoming athletes to strive towards their goals. “He is one guy who always wants to take us along despite what he has achieved. He always encourages us to do this or that if we are to be successful,” Choge says.

Likewise, Sang speaks of how his relationship with Kipchoge has evolved over the years. From being a mentor and coach to Kipchoge, Sang admits that he has learned so much from his student that he believes the roles have reversed.

“Up until 2017, I was his teacher. The roles have somehow changed because I’m beginning to be a student and he’s somehow teaching me,” explains the 1992 Barcelona Olympics 3,000m steeplechase silver medallist.

Kipchoge’s influence transcends the boundaries of the camp into the local environs where he attracts large crowds of onlookers whenever he joins other athletes for a run. Sang describes the 34-year-old as one who is ever ready to mingle with the local kids. “Every morning when he goes out there, the school kids they always shout his name. He inspires them,” Sang says.

To upcoming athletes in the camp, Kipchoge embodies a ‘never-say-die’ attitude that has seen him break the marathon world record. Based on this attitude, one of the athletes boldly projects that Kipchoge will go one better than the 1:59 target. “My opinion is that he will break the barrier, but between 1:59 and 1:58,” the athlete predicts.

Considering the hard work that the marathon giant has put in training and the support from INEOS, this prediction may become reality. As the world celebrates another milestone in his marathon career, upcoming athletes at the Kaptagat training camp will be encouraged in the fact that their dreams of following in Kipchoge’s footsteps are valid.