• Bafana finished third in Group D at the Africa Cup of Nations in Egypt behind Morocco and Ivory Coast‚ from where they were one of the four best-placed third finishers. 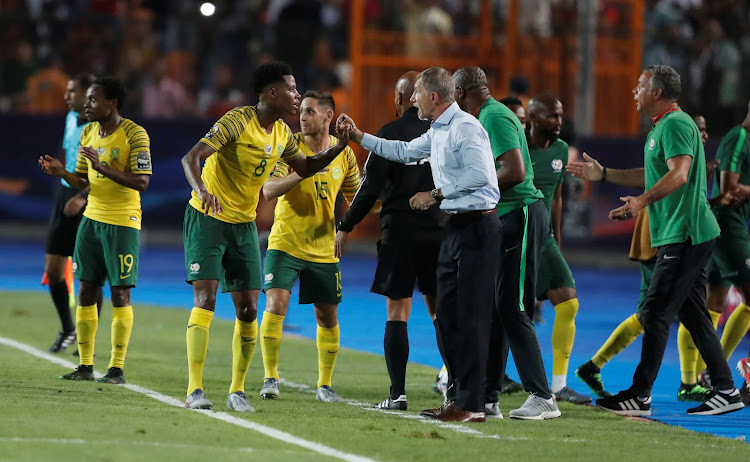 Irritable Bafana Bafana coach Stuart Baxter gave no indication of whether he’ll be staying on at the helm after he returned from Egypt with the team on Saturday.

Baxter’s future‚ and to an extent‚ his competency as a coach has been called into question after inconsistent performances in recent months.

But he insisted that he’s given the national team a fair bit of direction since assuming the hot seat in 2017.

“I do this job because I thought this national team needs direction‚ and I think I’ve given it the first stage of the direction," he said.

“To rate my own job‚ I’ll never do that because that’s being pompous and blown up and I wouldn’t do that. If I was to stay in the job‚ it was because I think I could do the job properly.

“Without sounding arrogant‚ not one per cent of my self-esteem would come from questions like that asking me to give a mark on my own performance.”

Bafana finished third in Group D at the Africa Cup of Nations in Egypt behind Morocco and Ivory Coast‚ from where they were one of the four best-placed third finishers.

They then beat Egypt in the round of 16 from where they lost to Nigeria in the quarterfinals on Wednesday evening.

“You’re asking questions (that sound like) ‘what was his mandate’ type of questions. “It’s a question that’s loaded so you can find an angle somewhere.”

“At Safa‚ one of our aims is to see our teams qualify for big tournaments‚ which has happened," he said. “It would be an insult if I’d tell you now as to what is our decision as an association.

“We have to look at many things‚ with an example being the last time Bafana qualified for the 2015 tournament and they exited in the first round.

“Today‚ Bafana is from Afcon and they reached the quarterfinals.

“We’ll go back as Safa‚ look at many things before we decide and we’ll talk to the coach. I can’t now say the coach should continue or he shouldn’t.

“As an employer‚ we have to look at many things.”