• Oguda said the league body, through its Marketing department, has cast its net to alternatives from other cooperates and the established Sports Fund without success leaving them to solely rely on SportPesa.

• All betting firms were supposed to be vetted afresh and have their licences renewed by July 1 in a bid to control the growing influx of the companies and ensure strict remittance of taxes. 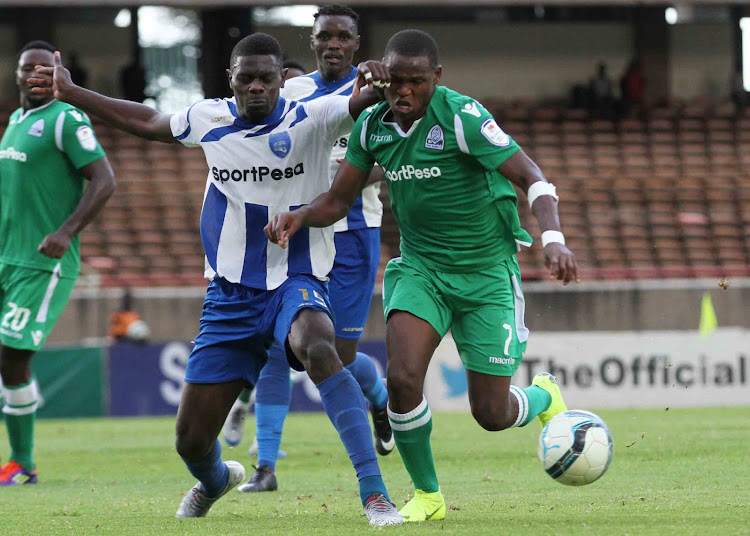 AFC Leopards' Abdalla Shitu and Gor Mahia's Nicholas Kipkirui in a past match. Both teams are sponsored by SportPesa
Image: FILE

The cancellation of betting firms operating licences has thrown the Kenya Premier League into the panic of losing their title sponsor SportPesa yet again.

The government and the firms have been at loggerheads, a move that has culminated into the former declining to renew the licences of 27 betting firms for allegedly not being tax compliant.

Among the firms affected is SportPesa which bankrolls the league body to a tune of approximated Sh87 million per annum and the biggest football clubs in the country—Gor Mahia and AFC Leopards.

The government, through the Betting Control and Licensing Board, has ordered all money transfer service providers to withdraw pay bill numbers of the affected firms, a development which has left KPL worried of losing the title sponsor again.

In January 2018, the Kenyan sports fraternity was dealt a major blow after SportPesa cancelled all its local partnerships citing a tax hike but later found their way back in April the same year—albeit with limited funding and to only four football entities.

All betting firms were supposed to be vetted afresh and have their licences renewed by July 1 in a bid to control the growing influx of the companies and ensure strict remittance of taxes.

On May 2, the Liti Wambua-led board banned outdoor, social media and television adverts as well as betting endorsements by celebrities but the High Court ruled in their favour later in the month.

KPL chief executive officer Jack Oguda fears the recent developments are aimed at frustrating the firm and may exit again, throwing their preparations for the forthcoming season in limbo. The new season is set to kick off on August 30.

“It’s a worrying situation for the league, Kenyan football and the two big clubs who are sponsored by SportPesa. We may be on the receiving end of the unending tussles with the government which dents the preparations and running of the new season. We know they are battling in court and we are positive that they will extend their financial assistance.”

Oguda said the league body, through its Marketing department, has cast its net to alternatives from other cooperates and the established Sports Fund without success leaving them to solely rely on SportPesa.

“We have had negotiations with other cooperates but so far we have not had positive feedback. We have also written to the Sports Cabinet Secretary to help us get money from the Sports Fund but nothing has come out yet. Even as we keep on waiting for a response, we hope SportPesa will remain.”

Be wary of unchecked online betting

Consequences of  unregulated trade include proceeds being used to fund terror and organised crime.
Opinion
3 years ago

All betting licenses  to be suspended from July 1 unless they have fully  paid taxes.
News
3 years ago
Post a comment
by MESHACK KISENGE
Football
12 July 2019 - 05:00
Read The E-Paper