Nairobi's City Stadium to get new artificial turf next month

•City Stadium is likely to host 2019/2020 sportPesa premier league matches for the first time since 2016.

• Former Harambee stars captain Musa Otieno says City’s facelift will be a major boost to K’Ogalo who used it as their home ground. 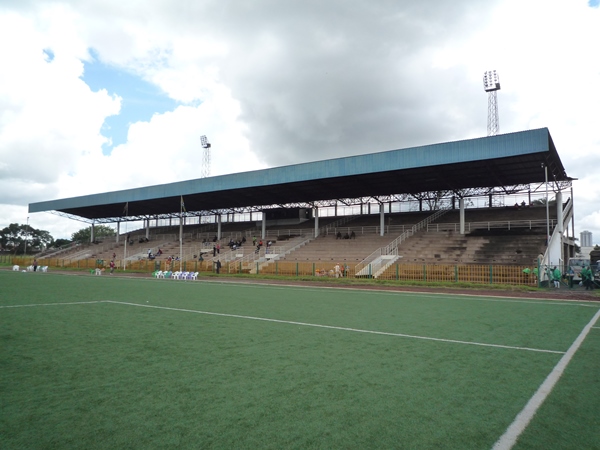 City Stadium after installation of the current astro turf in 2008
Image: courtesy

Nairobi City Stadium will get a new artificial turf by next month courtesy of the county government.

The oldest stadium in the country is likely to host 2019-2020 SportPesa Premier League matches for the first time since it was banned on February 17, 2016.

The good news was confirmed by Nairobi County sports department board member,  Judith 'Nyangi' Anyango, who is also the organizing secretary of KPL champions Gor Mahia.

Anyango, who spoke after a meeting with the county Sports board in Nairobi said  Gor Mahia and other teams that used City Stadium as their home ground will start using the pitch for training immediately before the terraces washroom and gym are done.

The county has decided to ensure the oldest stadium in the country returns to its glory days after lying idle for over two years.  “After the refurbishment of Dandora Stadium which is set to be unveiled next month, we have decided to give city stadium a major facelift, following a major outcry from football lovers who kept asking questions about City Stadium,”  said Nyangi.

The county will get a new contractor if the current one doesn’t fulfil his promise of completing the turf by end month. “We met the contractor who was awarded the job today and talked on how best the process can be fast-tracked,” added Nyangi.

SSCC chairman Laban Jobita said the artificial turf is worn out due to maintenance. 'The washroom and dressing rooms are in pathetic conditions and there was no running water in the stadium," he said.

The current artificial turf at the stadium was installed in 2008 by the world’s body Fifa.

Former Harambee stars captain Musa Otieno, who is also a member of the county sports committee, said City’s facelift will be a major boost to K’Ogalo who used it as their home ground, and other Nairobi-based clubs due it's easy access and closeness to the CBD.