Jurgen Klopp’s men had it all to do in the return leg on Tuesday evening.

• The goal was hailed online as past and present professionals were full of praise for Alexander-Arnold.

• The full-back insisted that it was a pure instinct to find his Belgian team-mate all alone in a Barcelona box. 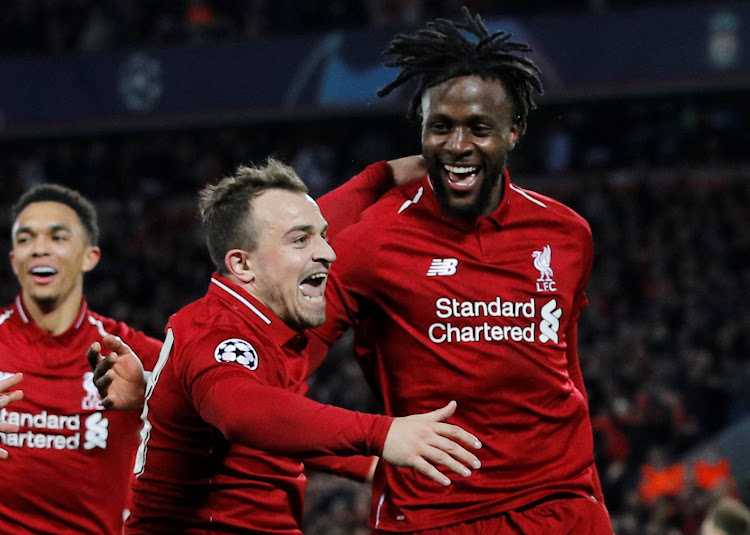 A moment of quick-thinking and ‘pure intelligence’ from Trent Alexander-Arnold has helped Liverpool pull off one of the Champions League’s greatest comebacks on a magical night at Anfield.

After a disappointing first leg at the Nou Camp that saw Barcelona score three without reply, Jurgen Klopp’s men had it all to do in the return leg on Tuesday evening.

But Liverpool did exactly that as Divock Origi got them off to a flying start before second-half substitute Georginio Wijnaldum scored twice in two minutes to bring the aggregate score back to 3-3. However, the moment of the match came 11 minutes from time when the Reds won a corner.

As Barcelona set themselves up to defend the corner, Alexander-Arnold set the ball down and analysed his options.  The English right back began to walk away from taking the set-piece to allow Xherdan Shaqiri to whip one in.

But in a flash of brilliance, Alexander-Arnold quickly turned back to take the corner and found an unmarked Origi in the centre of the box who then managed to score Liverpool’s fourth goal to send them into the Champions League final. After the full-time whistle, the 20-year-old was asked it was something he has been practising.

The full-back insisted that it was a pure instinct to find his Belgian team-mate all alone in a Barcelona box.

He said: “It was just instinctive, one of the moments where you see the opportunity, Div [Origi] was switched on to finish it off. Came at him a bit fast but he’s a top player.”

The goal was hailed online as past and present professionals were full of praise for Alexander-Arnold. Cesc Fabregas tweeted: “Alexander-Arnold, 20 years old. People will tell me it’s bad defending, I’m telling you it’s pure intelligence and vision.”

Meanwhile, Jermaine Jenas wrote: “Didn’t think I could be any more impressed by Trent Alexander Arnold such a brilliant young intelligent footballer!”

Liverpool manager Jurgen Klopp admitted that he didn’t really see the goal before substitute Ben Woodburn asked what had happened.

In his post-match interview, Klopp was asked about Alexander-Arnold’s ‘moment of genius’, to which he replied: “Oh my god 100 per cent. We had to be serious. But we needed to be cheeky as well. It was necessary.

BT Sport pundits Rio Ferdinand, Michael Owen and Robbie Fowler also admitted that they didn’t see it coming as Gary Lineker admitted that he still couldn’t quite pick out the pass after watching the replay four times.

Ferdinand said: “Jurgen (Klopp) said himself he didn’t really see it. If I’m being honest I never. I saw the ball going into the box, I didn’t understand the circumstances.

“He is working off instinct. For a young player to be able to do that at this age and at this level under that pressure is immense.”

Owen added: “Everybody’s looking at the ball that’s on the pitch. Then it gets passed off it, and if anybody is looking at the corner Alexander-Arnold is walking away so they probably turn away again.

“Actually, Divock Origi has turned away as he’s hitting it, it’s only when it’s halfway. It’s only Trent on that pitch that realises what’s going on here.”

Ferdinand responded that Alexander-Arnold’s pass has told Origi ‘what to do’ before the striker reacted by slotting the ball in the net. Fowler described the moment as ‘genius’ before praising Origi for his finish.

The former Liverpool striker said: “It is quite genius. What I like is that the finish was not easy as well. As much as it’s a great ball, and so so clever by Trent. It’s bouncing in front of Origi there.”

“It’s absolutely genius. You can use that word plenty of times in football. But that is a real genius.”

Owen added: “The ball isn’t a hard one for a professional footballer, it’s the vision, and then it’s the bravery.

“Everyone goes to type, put it down, everyone gets in position, put one hand up, that means this that means that. But to just know, there are however many thousand people here, “I’m gonna do something off the cuff,” that’s bravery.’

Fowler agreed that if not for Alexander-Arnold’s bravery, Liverpool might not have got their fourth in the end.

He said: “The bravery is a big thing because it could’ve gone the other way. If he doesn’t see it, Divock, then it goes the other way “why didn’t you wait for everyone to get in the box.”’

While most pundits agreed to focus on Alexander-Arnold’s quick thinking, former Manchester United and Real Madrid boss Jose Mourinho was quick to criticise the defending from Barcelona. Talking to beINSPORTS, the Portuguese manager insisted it was ‘schoolboy’ errors that cost them the goal.

Mourinho said: “That 4th goal, if you see that in an Under 14 or Under 15 match you would say “the kids are sleeping, the kids have no mentality to play football, the kids have to learn the basic things of the game.”

“But we are talking about the best players in the world and to concede that goal really shows you a state of mind.

“How to justify that is very difficult. I’d like to see Valverde explain that.”

Liverpool fans believe Origi should ‘get a statue’ outside of Anfield for playing his part in two goals while others could quite believe the fact that the Belgium international and Wijnaldum managed the comeback without the likes of Mohamed Salah and Roberto Firmino.

One fan tweeted: “The greatest thing I’ve seen as a Liverpool fan, give Origi a statue.”

Another said: “Gini Wijnaldum and Divock Origi have just inspired one of the greatest Champions League comebacks of all time. Don’t think that will ever sink in.”

After the game, Alexander-Arnold soaked in the moment by doing a solo lap of honour as he celebrated the moment with the Anfield crowd to cap off a stunning night for Liverpool. Alexander-Arnold even got a standing ovation from the travelling support in a mark of respect from the Catalan fans.

Former Ashes-winning cricketer Michael Vaughan applauded the young defender before describing him as a superstar for his effort on the pitch.

Vaughan tweeted: “Loved that... Trent Alexander-Arnold taking it all in... Lap of honour clapping on his own... A young superstar...”

Liverpool will go on to face either Tottenham or Ajax in the Champions League final on June 1. The final will take place at the Wanda Metropolitano in Madrid.