The Africa Zone 3 Boxing light-heavyweight champion now stands to walk away with Sh1.2 million if she bags the title.

•Boxing Federation of Kenya communications director Duncan Kuria said Andiego was forced to switch to the heavyweight division hours before the semis.

•In a past interview, Andiego said she intends to immerse herself fully in nurturing budding talent once she retires. 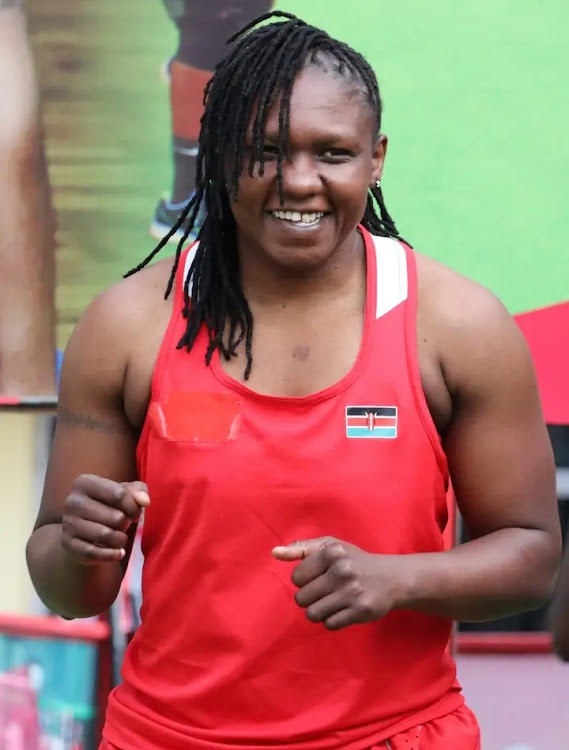 Three Kenyan boxers romped into the finals of the African Boxing Championship on Thursday in Maputo, Mozambique

Featherweight Samuel Njau and captain Nick Okoth also made it to the final. Njau beat Zambian Ben Banda while Okoth sailed past Walid Tarzout of Algeria in the lightweight division.

Boxing Federation of Kenya communications director, Duncan Kuria said Andiego was forced to switch to the heavyweight division hours before the semis.

“Elizabeth Andiego was supposed to fight in the light heavyweight category but she was the only entry in that category and therefore she could not get a medal,” Kuria said.

“She had to add 5kgs in three days to participate in the heavyweight semi-final.”

Andiego switched to the middleweight division at the Birmingham 2022 Commonwealth Games and cruised to the quarters without breaking a sweat after being handed a bye in the preliminaries.

Like the rest of the Kenyan quartet she, however, returned home empty-handed.

Andiego, 35, exhibited a sterling performance at the Africa Zone 3 Championship in Kinshasa, Congo in March, where she punched furiously to the golden podium.

She pulverized Tekasala Malewu of the Democratic Republic of Congo on her way to the momentous glory. She has attributed her meteoric rise to proper preparation and hard work.

Before her departure to Maputo, Andiego said she believed the experience she gleaned from the Kinshasa trip had set her on course for a successful medal hunt in future events.

The seasoned pugilist is elated to have marked her return to the ring in style after a past harrowing procedure conducted on her left leg limited her prowess in the ring.

The hard-hitting boxer escaped death by a whisker in 2015 when she was caught up in a grisly road accident while riding on a motorbike.

Post a comment
WATCH: The latest videos from the Star
by TONY MBALLA
Boxing
16 September 2022 - 00:00
Read The E-Paper