Speaking at a media event in Jeddah on Monday, the 32-year-old added: “That’s all I can really say. I think it’s been an amazing experience for me.

• The Kingdom has sought to stage sporting and entertainment events in recent years in a bid to attract visitors and move away from its oil-dependent economy.

• Amnesty UK says the country’s strategy of staging major sport — known as Vision 2030 — is deflecting conversation away from “the big story about Saudi Arabia”. 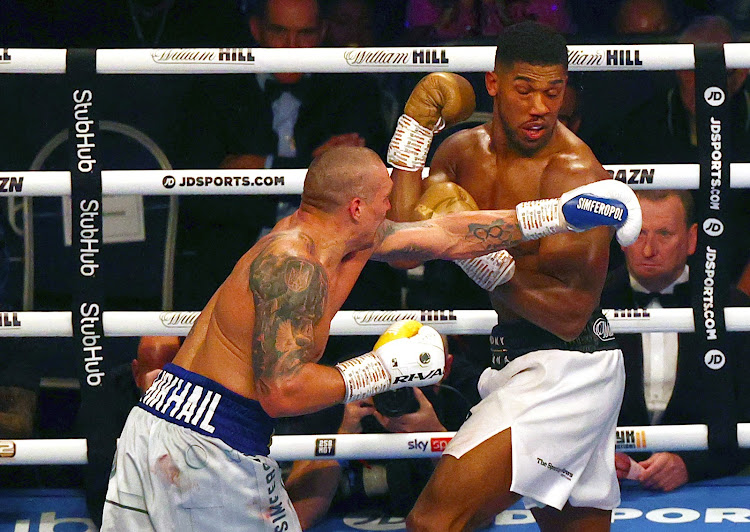 Those were the words of British heavyweight Anthony Joshua when questioned over the controversy surrounding his world-title challenge against Oleksandr Usyk taking place in Saudi Arabia this weekend.

Speaking at a media event in Jeddah on Monday, the 32-year-old added: “That’s all I can really say. I think it’s been an amazing experience for me.

The Kingdom has sought to stage sporting and entertainment events in recent years in a bid to attract visitors and move away from its oil-dependent economy.

Heavy restrictions on freedom of expression, women’s rights and the treatment of the LGBT community have been raised, as has the use of the death penalty for offences not recognised as crimes under international law, and the ongoing conflict in Yemen.

Joshua will be fighting in Saudi Arabia for the second time, having beaten Andy Ruiz in the capital Riyadh in 2019.

Amnesty UK says the country’s strategy of staging major sport — known as Vision 2030 — is deflecting conversation away from “the big story about Saudi Arabia”.

The Kingdom has hosted Formula 1, tennis and other major sporting events in recent years, while the Saudi-funded LIV Golf league this year has seen players accepting huge appearance fees to take part.

“It’s clear that Riyadh’s calculation is that sport is going to gradually relax people talking about executions, jailing, murdering of journalists and bombing in Yemen,” said Felix Jakens, Amnesty’s head of priority campaigns.

When questioned in July on the controversial nature of the fight, both Joshua and promoter Eddie Hearn focused on the growth of boxing in the country.

“Our government could learn a lot from the way Saudi are investing in the grassroots of boxing there. Participation is up 300 per cent in amateur boxing clubs since the Ruiz fight. There’s a genuine interest in the sport.

“Does there need to be more change? Loads of it. Is there change? I see it.”

But Amnesty have challenged his comments about change, saying the “human rights record is getting much, much worse”.

“It’s very, very difficult to determine what he’s talking about from a human rights perspective because everything that Amnesty and our partners are witnessing is a deterioration in human rights in Saudi Arabia,” said Jakens.

“For example, Saudi executed 81 people in a single day earlier this year by beheading. Punishment for adultery for married people remains stoning to death, the war in Yemen rages on, and the number of people being rounded up for using their freedom of expression or criticising the government is increasing.”

Joshua reportedly earned £66m for the Ruiz rematch in 2019, with unconfirmed reports suggesting he could earn up to £100m this time around.

‘Female fight shows change is being made’

In 2018, Saudi authorities arrested, and subsequently put on trial, a number of women’s rights activists who had led a campaign to lift a ban on women driving.

Ali says the request for her to be added to the card came directly from the Saudi royal family, which she believes “demonstrates they’re trying to make change”.

The undefeated boxer adds: “How can you blame someone who’s trying to make this huge change? I just don’t get that.

“This isn’t just a gimmick of let’s stick on women. They’re trying to make change and if I am trying to fight for women’s rights, why wouldn’t I support a country who is trying to change women’s rights?”

However, Northern Ireland’s former world champion Carl Frampton believes sportspeople should be more open on their intentions for competing in Saudi Arabia.

“I’ve heard some of the explanations and people talking about wanting to promote the sport in the Middle East,” Frampton says.

“I just think people would accept it if athletes just said the money was too good to turn down and that’s why I’m doing it.

“It’s a short career. You have a small window to make your money. So make hay while the sun shines.”

Amnesty UK has called on athletes competing in the country to speak out on issues, and praised Formula 1 driver Lewis Hamilton for raising awareness.

In March, ahead of the Saudi Grand Prix, Hamilton said he was not comfortable racing in the country and that it was not the drivers’ “responsibility” in choosing where to race — but that they are “duty bound” to raise awareness.

“We’ve been really receptive to what Lewis Hamilton’s done,” said Jakens. “He’s made himself fully aware of the human rights situation in the countries that he’s visiting.

“We’ve never said to Anthony Joshua or anyone that they shouldn’t box in Saudi Arabia. That’s not our position. We’re saying the reason that sport is suddenly going to Saudi is so they can improve that image. It’s a PR opportunity for them.

“So he’s not going to necessarily feel like he’s in a position to speak too critically of the human rights situation there, but we’ve seen that it can be done.”

It was a thrilling, yet scrappy at times, contest as 38-year-old Chisora edged a points win on a split decision.
Sports
2 months ago

The Briton, 35, is a former unified light-welterweight world champion and won silver at the 2004 Athens Olympics.
Sports
4 months ago

Joshua's rematch with Usyk could be staged in UK, says promoter Hearn

World heavyweight champion Usyk beat Joshua in front of a sell-out crowd in London in September last year to claim the WBA, WBO, IBF, and IBO belts.
Sports
5 months ago

Ukrainian rules bar men aged 18-60, who could be conscripted, from leaving the country.
Sports
6 months ago
Post a comment
WATCH: The latest videos from the Star
by BBC
Boxing
17 August 2022 - 00:00
Read The E-Paper