• Fury sent his opponent sprawling in an explosive third, only to see Wilder recover and the Briton found himself on the end of the Bronze Bomber's huge right hand twice in quick succession. 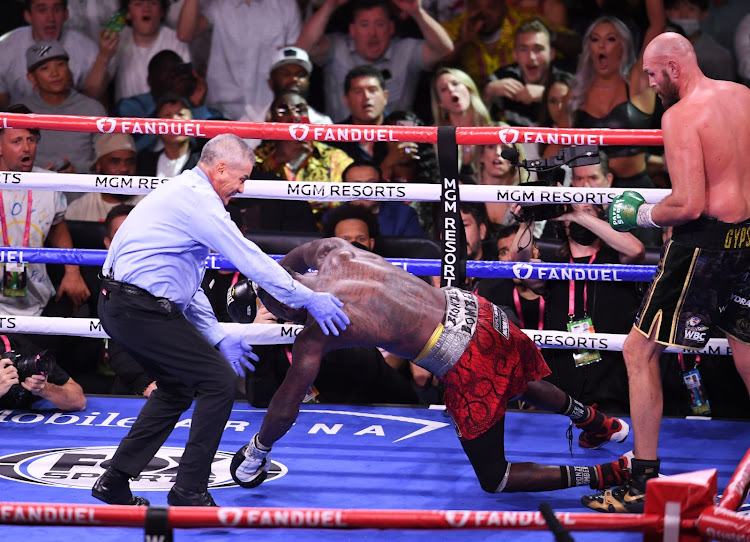 WBC heavyweight champion Tyson Fury of Great Britain knocks out US challenger Deontay Wilder in the 11th round of the fight for the WBC/Lineal Heavyweight title at the T-Mobile Arena in Las Vegas, Nevada, October 9, 2021.
Image: ROBYN BECK/AFP

Tyson Fury delivered a thrilling 11th-round knockout against Deontay Wilder to retain his WBC heavyweight crown as their trilogy bout produced another classic on an electric night at the T-Mobile Arena in Las Vegas.

Twenty months since Fury dethroned the American, the 33-year-old had to show all his resolve and resilience to extend his undefeated professional record to 32 fights after twice being floored in the fourth round.

Fury sent his opponent sprawling in an explosive third, only to see Wilder recover and the Briton found himself on the end of the Bronze Bomber's huge right hand twice in quick succession.

Wilder was hanging on by the end of the seventh but was still in a gruelling fight come the 10th, when Fury knocked him down once more, before delivering the final blow in the 11th to bring this particular chapter of heavyweight boxing to a close.

"I was down a couple of times, I was hurt, Wilder is a strong puncher," said Fury.

"It was a great fight. I will not make any excuses, Wilder is a top fighter, he gave me a run for my money. I always say I am the best fighter in the world and he is the second best.

"Don't ever doubt me. When the chips are down I can always deliver."

Fury shows he is never beaten

This might not have been the fight Fury wanted but, after a controversial draw in their first meeting in 2018 and seventh-round stoppage from Fury last time out, it again delivered the blockbuster battle the Las Vegas crowd was craving.

Tensions had been simmering throughout fight week and only continued to bubble as Wilder's delayed entrance left the arena waiting, before the lights finally went down and the American, who listed his elaborate and heavy ring-walk outfit as one of the excuses for his loss to Fury last year, emerged in a more understated fur-lined gown.

But what's a few minutes when this classic tussle was more than a year in the making?

Fury, dressed as a Roman centurion, followed a backdrop of AC/DC as both fighters stepped inside the ropes for the first time since their explosive meeting at the MGM Grand in February 2020.

That was pre-pandemic and the Morecambe-based boxer was buoyed by the thousands of UK fans who had flooded to Las Vegas to support their charge, but travel restrictions meant there was never going to be the boisterous following for the British hopeful this time.

But the local support could not help but be wowed by Fury once more as he again proved that, despite finding himself on the canvas, you can never write this man off.

Wilder came out looking to dictate from the opening bell with a series of jabs to the body as Fury took his time to size up a remodelled opponent, one new trainer Malik Scott says has more in his tool box than previously shown.

But it was Fury who then began to dominate and a huge left-right combination sent Wilder to the ground.

The 35-year-old survived the count and, rejuvenated by the bell, felled Fury with a mammoth right of his own and followed with another to send the champion tumbling once more in the same round as the anticipation of an upset grew.

Fury, though, rose from there on and a determined Wilder was hanging on for several rounds before the champion finally landed a right that ended the fight after 11 enthralling rounds.