•Despite the Olympic Games having been postponed by a year, Ongare has no pressure and she is taking everything in her stride.

•The 2020 Tokyo Olympic Games were pushed to next year thus delaying Ongare’s spirited campaign for a fairy-tale Olympic medal. 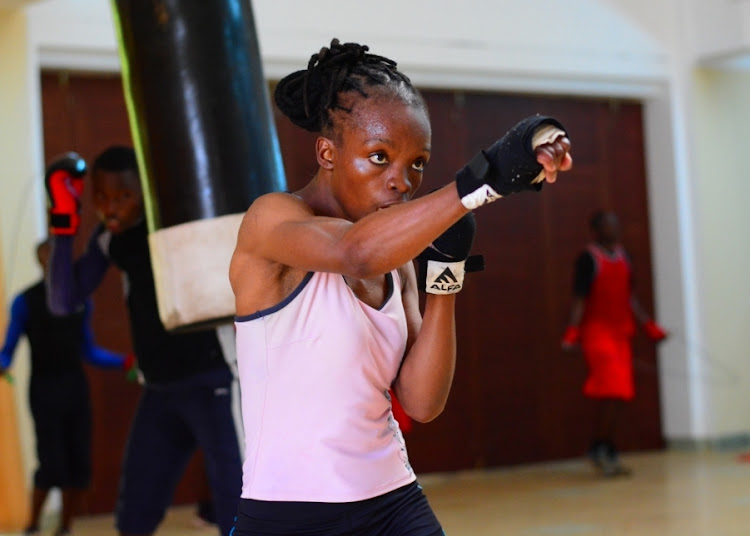 Christine Ongare in during a training session
Image: ERICK BARASA

Despite being the first Kenyan woman to win a boxing medal at the Commonwealth Games, Christine Ongare is yet to decide on her future in professional boxing.

Ongare defied odds to scoop bronze during 2018 Commonwealth Games in Gold Coast and further enriched her profile after sealing a place in the rescheduled 2020 Tokyo Olympic Games.

Asked if she had immediate plans to join paid ranks, Ongare said: “I always deal with one issue at a time. So, God willing, I’ll talk about pro boxing after next year’s Olympic Games in Tokyo. For now, I’m just focusing and looking forward to my Olympic debut. I want to be the second Kenyan gold medallist after 1988 Seoul Olympic Games boxing champion, the late Robert Wangila.”

Despite the Olympic Games having been postponed by a year, Ongare has no pressure and she is taking everything in her stride.

The 2020 Tokyo Olympic Games were pushed to next year thus delaying Ongare’s spirited campaign for a fairy-tale Olympic medal.

International Olympic Committee have announced that the Summer Games will start on July 23 next year in the Japanese capital.

Ongare said at least there is light at the end of the tunnel compared to seven months ago when government banned sporting activities.

Ongare is currently shaping up at Avefitness in Lavington, Nairobi and hopes to take her training to the next level once the government gives green-light on contact sports. “Fitness has always been an important part of my life,” she quipped.

Ongare says she has been relying on phone instruction from her coach Benjamin Musa during this Covid-19 period to remain in shape.

“Positive energy has kept me going ahead of the games in Tokyo. I have been training on my own under the coaches guidance and I am confident of achieving my target,” she noted. “I want to give my all in Tokyo in a bid to win my dream medal.”

“Coronavirus situation has affected my program in many ways. In  boxing, most things are about body contact and even if it’s a personal tournament, there’s always teamwork in training and this has been a big challenge. For me as an athlete, I have not had much time for fitness due to social distance issues. I am yet to focus on sparring, pad-work and training among other things.”

Ongare qualified to the Olympics after out-boxing Ugandan opponent Catherine Nanziri in the women’s flyweight (51kg) division at the Africa Olympics qualification tournament in Dakar, Senegal earlier in the year. She chalked up a unanimous points decision and a bronze medal to boost.

The number of weight classes for men’s categories were reduced from 10 to eight with the women’s weight classes increasing from three to five. The IOC confirmed weight limits for all 13 classes on June 19, 2019.