'TIME TO GIVE BACK'

Waguthii seeks to unearth the next world champion in Kibra

• Despite her dedication in entertaining her fans in the ring, Waguthii found fighting opportunities hard to come by and decided to hang her gloves at 35.

• Waguthii vehemently denies that age was a contributing factor for her increasingly diminishing fervour to box at that time. 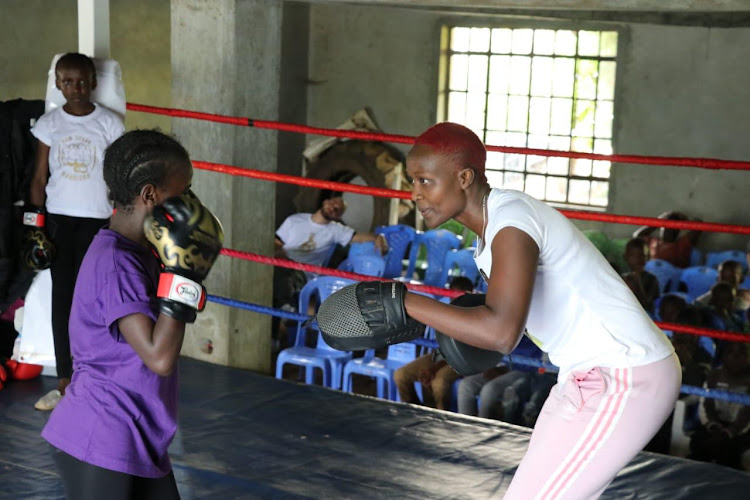 With active sports being a short career, it reaches a point when athletes decide enough is enough and hung their gears and equipment.

Upon retirement, they take various paths, be it academic careers they had studied in their formative years, business or ambassadorial roles, media duties just to name a few.

However, some do not have a clear path during their sporting days and are forced to retire early, upon which they take up informal careers/responsibilities in their communities that they feel need some action.

This is the road that former World Boxing Council (WBC) super lightweight champion Judy Waguthii has found herself on. Despite her dedication in entertaining her fans in the ring, Waguthii found fighting opportunities hard to come by and decided to hang her gloves at 35.

Her path in retirement was not as straightforward either as she noted gaps in the society that needed to be filled up. Having grown up in the Dandora slums, Waguthii witnessed numerous injustices among her community and especially sexual violence against vulnerable girls.

She therefore established ‘Raw Sugar Warriors’ at the Global Vision Hall, across the capital, in Kibra, where she trains 25 girls aged between eight and 17.

Waguthii feels that, in addition to providing security, self-defence and deviation from social vices while at the academy, the girls have the potential to take the mantle from the likes of Conjestina Achieng and Fatuma Zarika, who experienced and savoured the game at the top level.

“It’s not an academy, but more of a Community-Based Organisation for empowering underprivileged slum girls,” she says.

“After I was stripped of the WBC Silver belt in September last year, the insatiable appetite to fight and win was all gone. It was left to me and my manager (Greg Schira), who is also my husband, to put up the title defence but sadly, we were unable to secure sponsorship, so we couldn’t beat the stipulated mandatory defence deadline which is usually three months.”

Waguthii vehemently denies that age was a contributing factor for her increasingly diminishing fervour to box at that time. “As much as age wasn’t on my side, I always felt somehow strong and competitive,” she quips, adding: “My retirement had nothing to do with age. Being a WBC Silver champion and the next day a challenger at the highest level, I could not be wished away just like that, I was just stripped of the belt as the desire to fight had died out when sponsorships became few and far between.”

Kibra, where she frequents on a daily basis, isn’t for the faint-hearted. Given the disturbing nature of slum life and the fact that the girl child is constantly subjected to wanton harassment, Waguthii strives to teach her members a lot more than just the facets of self-defence and the art of boxing.

“Apart from boxing and the self-defence classes, we teach them about values. For example, we teach them not to let poverty define them and therefore we constantly work towards their goals and talents. On a wider aspect, it’s about mentorship. I am a big sister to them and I have created a safe space for them to be free, open up and ask questions concerning their teenage life. Sport is one of the tools we use to bolster their fortunes. In my team, I have a  Christian Apollo, who is a teacher by profession and his assistant, Diana. On the sporting side, there is my assistant Veronica Mbithe and I,” she reveals.

“Veronica is a boxer with the Armed Forces Team (Defaba), an amateur national repute. My hubby Greg, who managed me as a boxer, has always been behind my initiatives 100 per cent. Team Defaba and Paul Mung’ori have also supported me in kind while Boxing Association of Kenya (BAK) President Anthony Ombok embraced the concept and continues to support the girls.”

“We don’t have much to showcase as boxers but passion is literally what will get the next girls’ champion realise her potential. We used to train on Mondays, Wednesdays and Fridays. But due to the big chunk of Class Eight candidates, we decided to switch our training to Saturday afternoons; that is before COVID-19 pandemic changed our way of life. On Sundays, we used to train for three hours and then have tuition for the candidates executed by a qualified teacher.

“As much as we do sports, academics is key for the girls,” adds Waguthii.

To meet her financial obligations, Waguthii says: “I have hacked it with my personal funds. Buying boxing equipment and paying rent for the training hall. For the launch day of our Community-Based Organisation (CBO) which coincided with the Women’s Day on March 8, 2020, we got Sh126,000 donation from the French Embassy, courtesy of French Ambassador to Kenya, H.E Aline Kustermenager.”

However, due to the coronavirus pandemic, everything is currently on hold.

Waguthii, who won the Startimes/SJAK Sports Personality-of-the-Month in May 2018, was hoping to become Kenya’s second WBC World Champion after clinching the silver belt but her dream came a cropper due to lack of requisite resources.

The WBC Silver category is a replacement of the internationals, where winners get to join a pool of pugilists as challengers for the WBC world titles. The only Kenyan to chalk up the WBC world title (the most prestigious in boxing) is Fatima Zarika, who later lost the Super Bantamweight belt in a rematch with Mexican Yamileth ‘Yeimi’ Macardo after holding it for four years.

“I would have loved to achieve much more but lack of sponsorship, frustrations and lack of appreciation from the government was heartbreaking. But I believe I did my best under the circumstances and it was time to move to the next step. Sometimes you just need to think big and make major decisions in your career when things are not working your way. That’s when the idea of giving back to the society came to mind. I’m naturally a go-getter and when I moved from one media house to the other appealing for help, I felt bad that no one came to my rescue. So I decided that I was better off starting something for young girls, to help them realise their potential by converting challenges to opportunities,” says Waguthi.

Waguthii, who was brought up in Dandora slums, says her organisation, situated near her residence, is all about social work and transforming lives.

“I hope I’ll live to see a crop of strong young ladies who would be able to defend themselves against sexual aggression in slums as well as bring out their raw boxing talent. Kibra has produced several boxers of national repute including Olympian Omar Kasongo and Joshua ‘Poison’ Onyango.

Waguthii, who started boxing in 2007, adds: “I never boxed in amateur ranks. I just switched directly from kick-boxing to professional boxing and left the scene with 17 wins from 30 fights.”

Among the highlights in her final days in the ring was a 2017 International Boxing Organisation (IBO) Super Lightweight World Title defeat to Russian Svetlana Kalajova.

After her fairy tale WBC achievement, Waguthii was then placed as a top contender for the WBC World Female Super Lightweight title that was then held by Érica Anabella Farías from Argentina.

In December 2018, Waguthii landed a shot at a world title, this time a WBC world title, but lost to Belgian Deifine Persoon. Her last fight was a non-title bout at Charter Hall, where she stopped Asha Ngedere of Tanzania in style.