Three basketball courts set to be unveiled in Nairobi

Giant Africa stated that the three courts will supplement those already in place in the country.

•Giants of Africa Foundation is back in Kenya to unveil four new basketball courts under their Built Within Initiative, a commitment to build 100 courts across the continent. 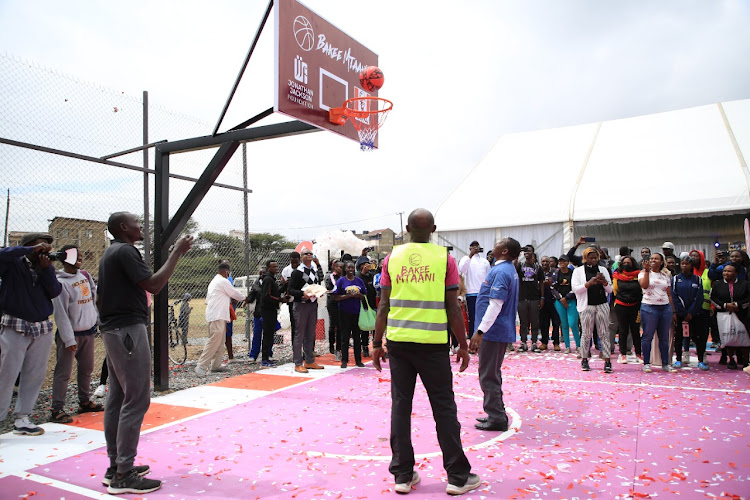 Director General of Sports Kenya Pius Metto goes for a basket during the opening of the court
Image: HANDOUT

Three cutting-edge basketball courts will be unveiled in various parts of Nairobi County this weekend.

The facilities were built by a non-profit organization that promotes youth basketball in Africa, Giants of Africa.

Giants of Africa Foundation is back in Kenya to unveil four new basketball courts under their Built Within Initiative, a commitment to build 100 courts across the continent.

“The new courts will complement the two courts previously in Kenya in 2021," read a statement issued by the organization.

"Dagoretti High School, Divine Word Parish (DIWOPA - Kayole), and Umoja 2 Estate all received new basketball courts. The first two will be unveiled on Friday, with the third on Sunday.

Giant Africa stated that the three courts will supplement those already in place in the country.

These include St. John Primary Catholic School (Korogocho), the Samburu Girls Foundation, as well as the Sauti Kuu Foundation Sports, Resource, and Vocational Training Centre, which was inaugurated during former US President Barack Obama's visit to Kenya in 2018.

Nairobi County Governor Johnson Sakaja is among the VIPs expected to attend the event.

"The events will include remarks from Giants of Africa co-founder Masai Ujiri, community leaders, and county, and National Government representatives,” the statement read.

“The ceremonies will be followed by a basketball clinic for young boys and girls, conducted by NBA personnel.”

Giants of Africa has used sports to help empower youth to dream big, hosting basketball camps and clinics for boys and girls in 17 countries across the continent.

“In 2021, Giants of Africa launched the 100-court initiative and unveiled 20 basketball facilities in Kenya, Tanzania, Nigeria, Burkina Faso, Ivory Coast, Rwanda, the Democratic Republic of Congo, and Senegal to date.”

To commemorate the organization's 20th anniversary, the inaugural Giants of Africa Festival will bring over 250 youth from 16 African countries to Kigali, Rwanda in August 2023 for a week-long celebration of basketball, education, culture, and entertainment.

Legendary Toronto Raptors basketball star Masai Ujiri co-founded the foundation in 2003 to use basketball to educate and enrich the lives of African youth, both boys and girls.

Masai is the first and only African-born President of a professional sports franchise in North America — Toronto Raptors.

In 2019, he propelled the Raptors to their maiden NBA Championship and the first NBA title won by a team outside the United States in NBA history.

Born and raised in Nigeria, with a deep passion for basketball, Masai began to pursue a career as an executive when his professional basketball career came to an early end.