The varsity side have a tight schedule as they are lined up to face former champions Ulinzi Warriors on Saturday and Equity Bank Dumas a day later.

• Blades are second on the table having played 14 games, lost five and are battling Kenya Ports Authority, Thunder, Ulinzi and Equity Bank Dumas. 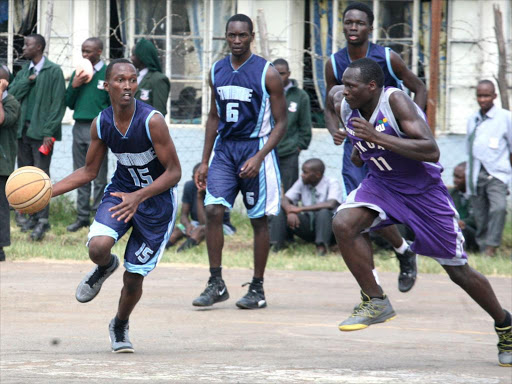 Strathmore University Blades tactician Tony Ochieng said his focus is to finish top of the log in the Kenya National Basketball Federation (KNBL).

Ochieng said his boys are ready for return to action foloowing a month-long break.

The varsity side have a tight schedule as they are lined up to face former champions Ulinzi Warriors on Saturday and Equity Bank Dumas a day later.

"We bank on our fitness levels since we started training in the first week. We are ready mentally although the upcoming games look tough," said Ochieng.

However, he noted that his boys will have to engage a higher gear coupled with self-belief and determination.

Utility player Denis Koja, who featured in the Basketball Africa League (BAL) with Kenya Ports Authority will be key.

"He had a good experience against top players in the two BAL outing," Ochieng noted.

"He has shown in our training that he is bringing something new to the team that will help us move forward."

Blades are second on the table after 14 games, with five losses, and are up against Kenya Ports Authority, Thunder, Ulinzi and Equity Bank Dumas.

The bankers' coach Carey Oketch said his boys started training last Friday but are still not there physically, mentally and emotionally.

However, ANU coach Mike Oluoch is worried now that his charges have not been training together with the university re-opening on Tuesday.

KBF fixtures secretary Joseph Amoko has 25 matches planned for this weekend in Nairobi, Mombasa and Nakuru.

The win saw the porters inch closer to securing a quarterfinals berth. They play their last Group A match against DR Congo side CNSS on Tuesday.
Sports
1 month ago
Post a comment
by DAN OWERRE
Basketball
17 January 2023 - 05:00
Read The E-Paper