Coach Genga says his emphasis is to rebuild UoN team

The tactician, a former Co-operative Bank of Kenya and national team forward, said guiding young players is a journey.

•  The win pushed the campus lads from the seventh position to the sixth with 11 points from eight games. 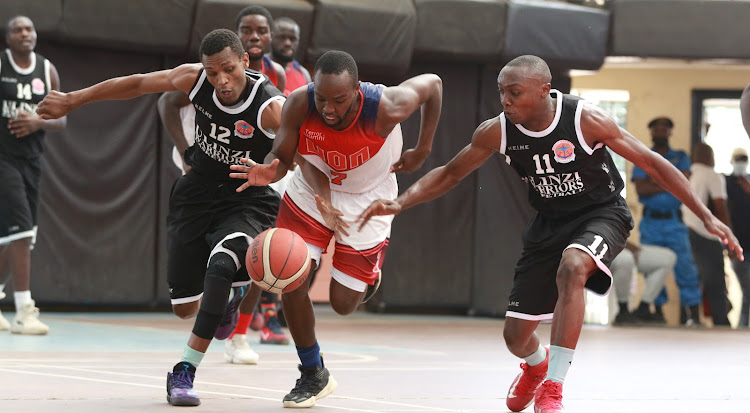 UoN Terrorists’ Dius Gioche (C) battles for the ball with Victor Bosire and Eric Mutoro of Ulinzi Warriors during a past KBF league match
Image: FILE

University of Nairobi Terrorists' coach Eugene Genga has admitted that his side has a long way to go despite their 78-67 league victory over Zetech University Titans over the weekend.

The win pushed the campus lads from the seventh position to the sixth with 11 points from eight games. Kenya Ports Authority, who didn't have a game over the weekend, top the 12-team log with 19 points from ten matches.

"We are glad for the win but we shouldn't be carried away. We need to improve with time if we are to finish in a respectable position. We played well in the first half but had lapses in the second. My players have a lot to learn and they have to grow up fast or perish," Genga said.

The tactician, a former Co-operative Bank of Kenya and national team forward, said guiding young players is a journey.

He said the biggest task with the varsities is that players exit to new clubs after every graduation and we have to start all over again to rebuild.

"Sadly, they have to move on to the clubs, but we will continue the struggle of trying to make them better players," he said.

The match played at the Nyayo Stadium saw the campus lads take a 43-26 halftime lead and cruised to their third win of the season.

Collins Nyamwea posted 15 points, Pharez Adala 14 and David Ochieng 14. Titans' Keith Okola shot 15 and Thomas Ragen 12. Titans' coach Job Munene said his boys are still learning and he will take one game at a time during that process.

Eagle Wings tackle Africa Nazarene University Panthers in what should be a closely-fought match-up.
Sports
2 weeks ago

The campus lads, who are now on a three-match winless streak, led 30-28 at the break before collapsing to the Wolfpacks in the last quarter.
Sports
2 months ago
Post a comment
WATCH: The latest videos from the Star
by DANN O’WERRE
Basketball
20 September 2022 - 05:00
Read The E-Paper