Deaf basketballers to be incorporated in hearing teams

•The team lost all their Pool A matches to Argentina, Israel, Poland and the United States 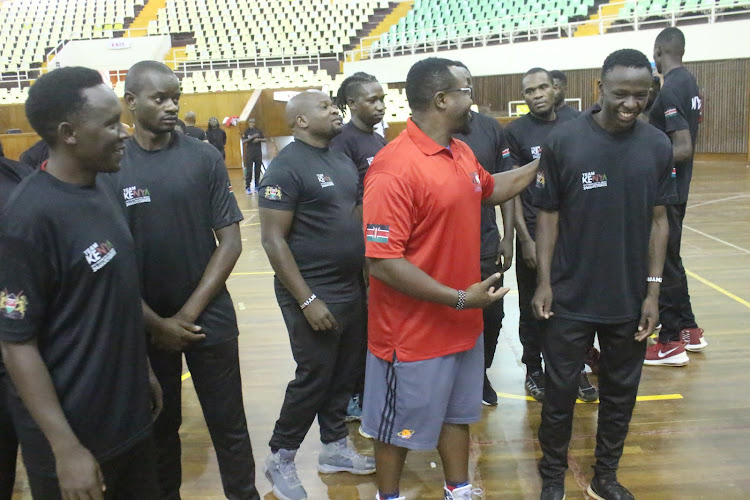 Coach Jeff Mwaniki with some of his players after a training session at Kasarani gymnasium
Image: ANGWENYI GICHANA

The men's national deaf basketball team coach Geoffrey Mwaniki says he is currently negotiating with various basketball teams in the country to sign some of his players who shone at the 24th edition of the Deaflympics in Caxias do Sul, Brazil.

Mwaniki said the strategy is crucial to providing the lads with much-needed exposure and valuable playing time.

"We need to have a national league because basketball is a game of habit. The more you play it, the better you get. I am talking to some of the coaches of these teams to see if some of these players can play alongside their hearing counterparts. I know, for example, Kisumu Lakeside are looking at two players," Mwaniki said.

He added: "We have James Omondi who was the best rebounder at the Deaflympics. He was scouted by the United States coach who is interested in taking him to America."

Mwaniki was speaking at Jomo Kenyatta International Airport upon the men's and ladies' teams' arrival from Brazil.

The men's team bowed out of the competition at the preliminary stage after losses to their Group A rivals, Israel, Argentina, Poland, and the United States.

Nonetheless, Mwaniki said the team has made huge strides and got better with every match.

"Our first game against the United States was a shocker. We played badly and lost by a huge margin. Afterward, we sat down, analysed our mistakes and sought to work on them. You can see that with every match, we played better and cut out these errors," he said.

The tactician added that Kenya has stamped itself as a continental powerhouse in deaf basketball and have a solid foundation to build on.

"The exposure we got was immense. From now on, we shouldn't compare ourselves with Africa but the rest of the world. What works for these big teams is exposure and a consistent league," Mwaniki said.

"It wasn't easy but we really did our best. This is a fairly new team with inexperienced players and so it was never going to easy. We played against tough teams like Argentina, Israel and the US. With this experience, we hope to get better in the future," the point guard said.

Musalia further urged the sports authorities concerned to build upon the gains in Brazil to improve the standards of deaf basketball in the country.

"We now need to set up the right structures to improve the standards of the game in the country. This is important so that we gain the experience of competing against these big teams. The fact that we were beaten does not mean that we lost rather I am proud of these lads because they are young and have bags of potential," he said.

Musalia added: "We represented Africa and it is my hope that this will inspire other African teams. We have flown the African flag high and we hope other countries will follow suit."