A DREAMER SINCE BIRTH

Why basketball runs in Kedogo's veins

In 2020, Kedogo was elected as the Nairobi Basketball Association (NBA) first vice-chairman

•Kedogo’s plea to local coaches is for them to keep working together since this is the only way to upgrade local standards in the country to an international one. 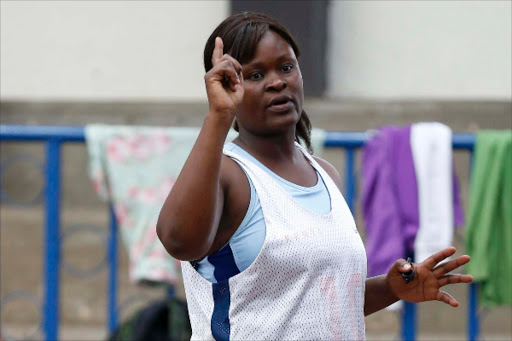 As a player, Everlyne Kedogo scaled many heights both at club and international level but she had no idea what lay in store after retiring and venturing into coaching.

A few weeks ago, FirstCoach, where Kedogo is regional director, organised a course for young coaches and an overwhelming 80 participants attended.

The function at the YMCA Shauri Moyo Hall attracted aspiring coaches from across the region. This followed similar clinics in South Sudan, Burundi, DR Congo and China.

“We intend to empower young coaches by teaching them the correct ways since the game keeps evolving. They must also impact the next generation of players positively,” Kedogo says.

Other than at FirstCoach, Kedogo teamed up with former KCB Lionesses and national team player Alice Onono (USA) to start AfricasDream which has also grown faster than she thought.

“At AfricasDream, we have managed to open an academy in Goma, DR Congo in addition to forming two teams —Dreamers (Congo) and the Dream Girls (Kenya),” she says.

“We have managed to send over 15 boys to the USA since 2018 before Covid-19 slowed us down due to the travel restrictions. Hopefully, we will start again.”

The two programmes deal with talented young boys and girls and also help in securing basketball scholarships in the USA. 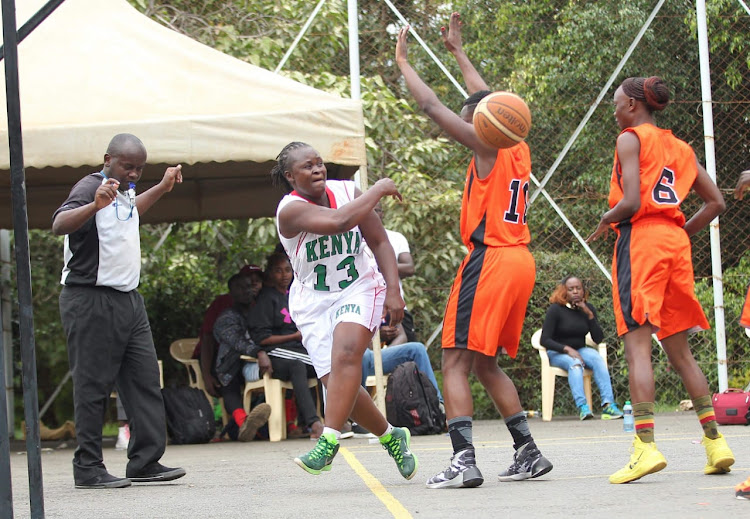 Evelyn Kedogo in a past action
Image: HANDOUT

A dreamer since birth

In December 1991, Kedogo left Western Kenya for Nairobi weeks after completing her secondary school education at Tigoi Girls and things have been rosy ever since.

It was while in high school that her exploits in basketball endeared her to many local coaches with Kenya Railways showing the greatest interest.

“Basketball gave me a job. I took it with both hands. I am happy and satisfied with what God has given me,” Kedogo, who is in charge of the Nairobi Commuter Train said.

Kedogo played in three national school championships; Kamusinga (1989), Kisumu (1990), and Mombasa (1991). And it was here that Railways showed up with a deal.

“She was very good at both netball and basketball. I asked her to join us after the exams and she agreed,”  former Railways coach Joseph Amoko says.

Kedogo was not even 18 years when her late mum Margaret Mmbone escorted her to Kisumu from their Gambogi home in Vihiga County to board a train to the city. 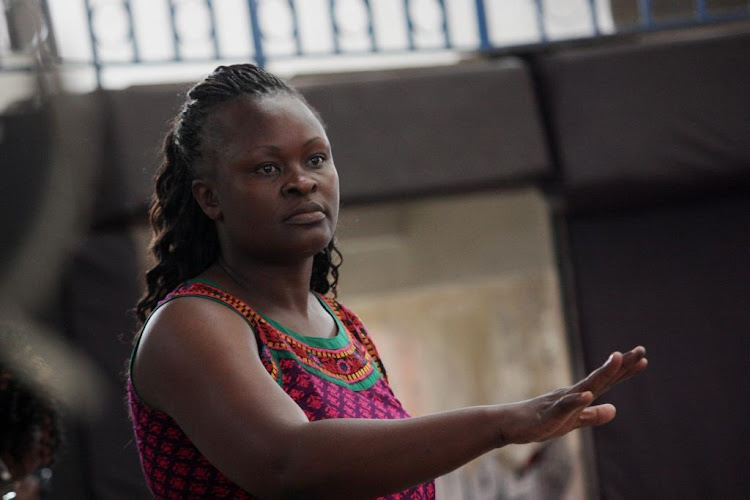 It remains a memorable journey in her mind as the train snaked its way throughout the night before pulling up at the Nairobi Railways Station the following morning.

“On arrival, I found coach Amoko waiting for me. We went to the office and I started working straight away,” she recalls.

Throughout the day, she knew it was a God-given opportunity and was determined to succeed in both sports and office jobs.

“I was taken to Nairobi Railways Club the same afternoon where I joined my new teammates for our first training session,” Kedogo notes.

At the training venue, Amoko revealed, Kedogo opted for basketball since competition in netball was stiff.

“Even though she also excelled in netball, I personally needed her on the basketball court and she did not disappoint as she continued to work hard,”  Amoko recalls.

In the team were the late Valentine Apondi, Margaret Akello, the late Pamela “Bruno” Odhiambo and the US-based trio of Rose Achieng, Celestine “Super” Imbaya and Pracky Inyanza, among others.

Kedogo was a regular on the team. In 1992, she guided Railways to third place in her first Kenya Communications Sports Organisation (Kecoso) games in Machakos.

John “Nijo” Chasimba replaced Amoko as the team tactician in 1995 and injected new players into the team. In came Caroline Oyugi and Faith Ondenyi and the team was ready to push for honours.

In 1996, Railways shook every team for their first and only national league title without losing a game. They also won the KCB centenary trophy.

“This is the year we literally called the shots. We did it in style for our team manager Dorothy Ouko, who had just lost her husband,” Kedogo, who bagged the top scorer’s award, recounts.

During the same year, they represented the country at the East and Central Africa Club Championship (now FIBA Africa Zone Five) in Nairobi. They finished second behind KCB Lionesses. 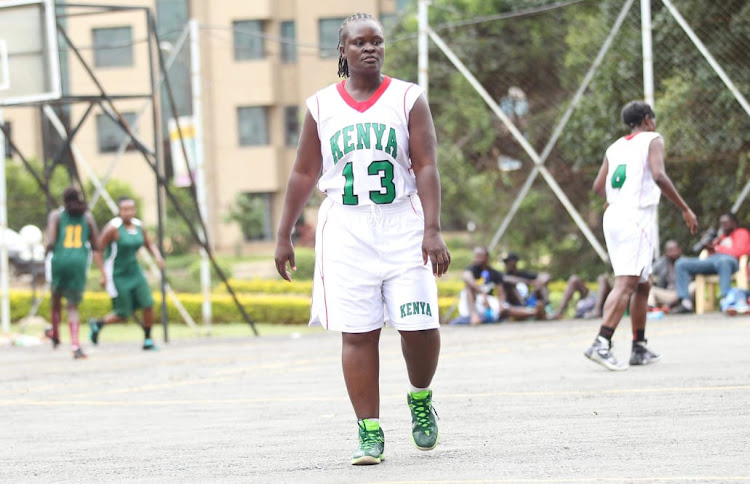 In 1997, Kedogo moved to Lionesses in the regional club show in Kampala, Uganda. A year later, she was in Dar es Salaam, Tanzania in the same tournament, but this time with NSSF.

“We were third in the championship in Dar and I was named the Most Valuable Player, leading scorer and top three-point scorer as well,” she beams.

Kedogo made the national team to the Fiba Africa AfroBasket Women championships in Nairobi in 1997. Kenya lost 90-62 to Nigeria in the bronze medal playoff.

Besides Kedogo, Railways had four other players on that team including Apondi, Joyce Alividza, Joyce Makungu and Roselyne Achieng, who rejoined from the USA.

In 1999, Kenya qualified for the All Africa Games in Johannesburg, South Africa but, sadly, missed out on the festival due to internal squabbles.

“It was a sad situation. After all that work during the qualifiers, the team missed the games due to wrangles. Worse, we had even started training camp at Kasarani,” Kedogo narrates.

Between 2001 and 2002, Kedogo visited Seychelles and Mauritius for the Indian Ocean Island Invitational Tournament. Kenya dominated both events.

In 2003, the disappointments of Johannesburg would be forgotten as Kenya joined the rest of the continent in Abuja, Nigeria for the Pan Africa Games. Kedogo was named the captain and she says this was an unforgettable moment in her life. In 2005, she retired from the national team.

Ten years after guiding Railways to their only national league title, Kedogo moved to Storms. In 2008, she joined Eagle Wings and played at the Fiba Africa club show in Nairobi.

The self-supporting side finished tenth and this marked her last appearance as a player. In 2012, she joined the late Thomas ‘Smutts’ Olumbo on the team’s technical bench.

“This surprised and confounded me because I never even thought I was his favourite player. He encouraged me and I  did not look back,” she says.

During the 2013 FIBA Africa Club Championships in Meknes, Morocco, with coach Olumbo unwell, it was Kedogo who called the shots from the touchline.

Eagle Wings won a bronze medal, becoming the first Kenyan club to make the podium in a continental championship. This feat remains unmatched to date.

A year later, she was named the national women’s team head coach and took the team to the Zone Five show in Kampala, Uganda.

In 2019, she worked with Ronny Owino as his assistant in a regional tournament in Kampala. The team did well to qualify for AfroBasket in Dakar, Senegal.

Owino, by then in charge of KCB, says he had nightmares assigning a defensive player to contain Kedogo whenever the two giants met.

“Kedogo was a very efficient player scoring three points at will and great energy level on defence. She was also a leader on the court, an asset any coach would love to have,” says Owino.

Kedogo has gone on to coach the Under 14 and Under 18 boys and girls' national teams. In 2014, she handled the junior side at the ANOCA tournament in Rwanda.

Kedogo’s plea to local coaches is for them to keep working together since this is the only way to upgrade local basketball to international standards.

“We should come up and work together like they do in other countries. They are nurturing talent at an early age yet here we are busy fighting and criticising each other,” she laments.

Brace up for tighter schedule ahead, clubs told

He said the new season that has been delayed until the men's Premier League play-off final on April 16, will tip off next month.
Sports
3 months ago

This new development has been released by KBF secretary Ambrose Kisoi following an executive meeting.
Sports
3 months ago
by DANN O’WERRE
Basketball
08 April 2022 - 05:00