Chris Paul added 18 points with 16 assists as the Suns won for the ninth time in their last 10 games in their return home from a perfect five-game road trip.

•The Suns took over in the third quarter to lead by as many as 20 points, while taking a 92-74 advantage into the fourth quarter.

•Despite their personnel issues, the Pacers managed to keep pace early, leading 25-24 after the first quarter. 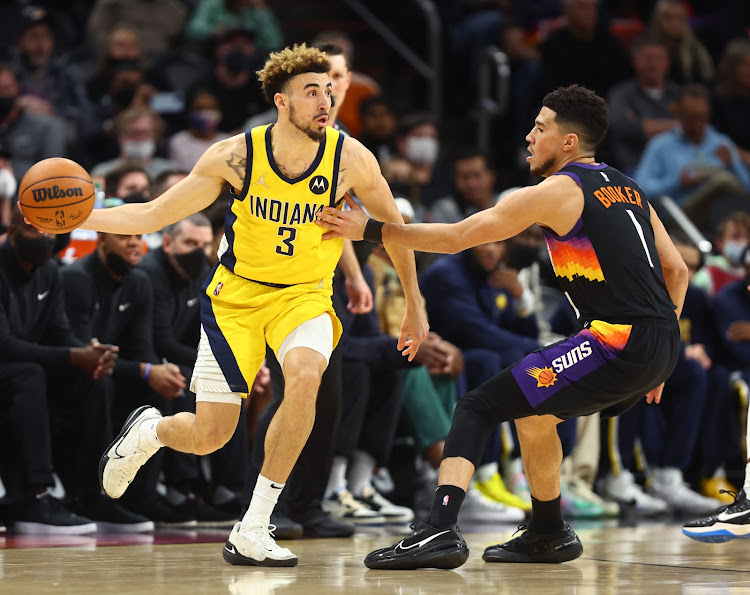 Mikal Bridges scored 23 points and Bismack Biyombo added 21 points with 13 rebounds as the Phoenix Suns extended their winning streak to six games with a 113-103 victory Saturday over the visiting Indiana Pacers.

Chris Paul added 18 points with 16 assists as the Suns won for the ninth time in their last 10 games in their return home from a perfect five-game road trip. Phoenix won on an off-night for leading scorer Devin Booker, who finished with 11 points while shooting 5 of 23 from the field.

Chris Duarte and Lance Stephenson each scored 17 points for the Pacers and Goga Bitadze added 16 with 11 rebounds, but the Pacers were not able to match the effort they delivered Thursday in a victory at Golden State.

Indiana was without starters Caris LeVert (calf), Malcolm Brogdon (Achilles) and Domantas Sabonis (ankle) for the second consecutive game. Sabonis leads the Pacers with 19.0 points per game, while Brogdon is second (18.5) and LeVert is third (18.4).

Jeremy Lamb had 14 points for the Pacers, who saw their modest two-game winning streak come to an end. It was the first time Indiana had won consecutive games since winning three consecutive Dec. 6-10.

Despite their personnel issues, the Pacers managed to keep pace early, leading 25-24 after the first quarter. The Suns began to assert themselves in the second quarter, leading by as many as eight points and taking a 59-54 advantage into halftime.

JaVale McGee had 13 points and 12 rebounds for the Suns, who were without Deandre Ayton (ankle). Justin Holiday and Oshae Brissett each had 10 points for the Pacers.

Kyrie Irving will not change his mind and get vaccinated against Covid-19 despite an injury to fellow Brooklyn Nets player Kevin Durant.
Sports
3 months ago

Philadelphia has the longest winning streak in the Eastern Conference and the second-longest one in the league behind the Memphis Grizzlies who have ...
Sports
4 months ago
Basketball
23 January 2022 - 19:18