Phoenix captured the past three games by an average of 19.7 points, including a 121-107 win over the San Antonio Spurs on Monday.

•A prime reason for the Mavericks' solid play has been an improvement on defense. 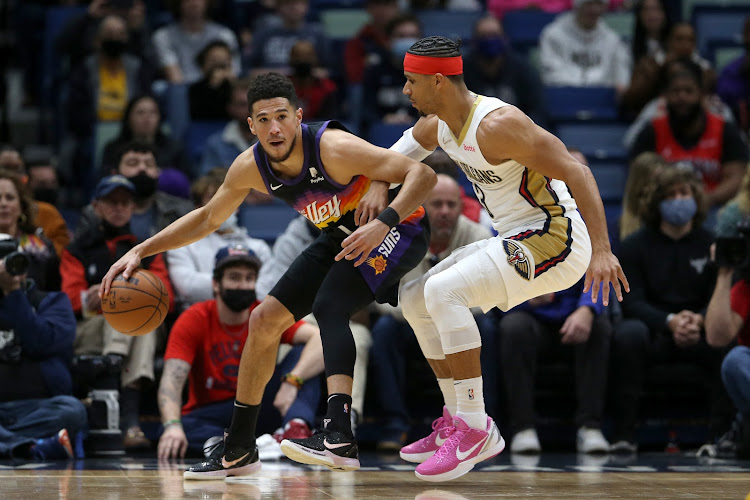 The Phoenix Suns look to complete a perfect five-game road trip when they visit the Dallas Mavericks on Thursday night.

Phoenix captured the past three games by an average of 19.7 points, including a 121-107 win over the San Antonio Spurs on Monday.

Star guard Devin Booker poured in a season-best 48 points against the Spurs and averaged 37.7 over the past three contests.

Booker is the biggest reason why the defending Western Conference champions possess a league-best 34-9 record and are 7-1 in their past eight games.

"I did the points with losses, and that's not it," Booker said. "I just try to win basketball games. That trumps everything."

Booker made five 3-pointers as part of an 18-of-33 shooting performance at San Antonio while falling just shy of his fourth career 50-point outing. He also had six assists, five rebounds and three steals.

It was the 12th time this season Booker scored at least 30 points.

"I think it's probably because we've got a team that's so supportive and we enjoy seeing each other do well," Paul said. "So, when he gets it going like that, we try to feed him and then we still make the right play. For us, it's all about ultimately winning the game."

Biyombo got increased minutes because starter Deandre Ayton was sidelined with an ankle injury. Ayton also has been ruled out against the Mavericks.

The Suns beat Dallas twice in a November back-to-back in Phoenix and have won the past eight meetings and 15 of the past 18.

Doncic is coming off a strong game as he poured in a season-best 41 points Wednesday in Dallas' 102-98 win over the visiting Toronto Raptors, his 10th career 40-point effort. He also matched his season-high of 14 rebounds and contributed seven assists and four 3-pointers.

"I just got to keep working and keep trust in my shot," Doncic said in a postgame television interview. "Not every day is going to go the way I wanted, but you just have to keep trusting your shot."

The victory was the fourth in a row and 10th in the past 11 games for Dallas.

It also was the Mavericks' sixth straight home win. Dallas is 3-0 on a five-game homestand.

A prime reason for the Mavericks' solid play has been an improvement on defence. Not only has Dallas held nine of its last 12 opponents under 100 points but it has held the opponent under 50 per cent shooting from the field in 22 consecutive games.

The Mavericks limited Toronto to 38.5 per cent shooting from the field, including 8 of 32 from 3-point range.

"Our defence has been great," Doncic said. "We're 10-1 our last 11 games and it's been because of our defence. Offensively, we just shared the ball and kept everybody involved. I would say our defence is the key."

Kyrie Irving will not change his mind and get vaccinated against Covid-19 despite an injury to fellow Brooklyn Nets player Kevin Durant.
Sports
4 months ago

The Warriors arrived in Phoenix for the marquee clash with three of their top four scorers — Andrew Wiggins, Damion Lee and Jordan Poole — sidelined ...
Sports
4 months ago
by REUTERS
Basketball
20 January 2022 - 12:44