Inspired by Thompson's return, the Warriors led by as many as nine points in the first quarter.

•Lamar Stevens had 17 points to pace Cleveland, which was making its second stop on a six-game Western swing. 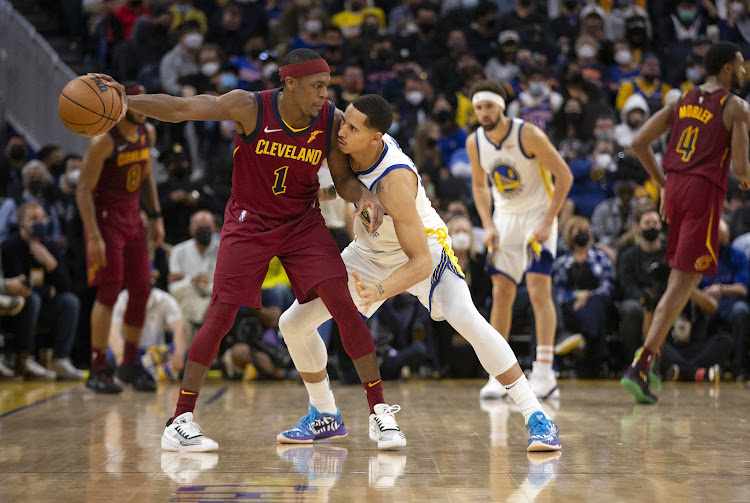 Klay Thompson returned from a 2 1/2-year absence with 17 points in 20 minutes of play, and Stephen Curry scored a game-high 28 points Sunday night as the Golden State Warriors snapped a two-game losing streak with a 96-82 win over the visiting Cleveland Cavaliers in San Francisco.

Playing for the first time since tearing the ACL in his left knee in Game 6 of the 2019 NBA Finals, Thompson needed just 40 seconds to record his first basket of the season and less than a half to throw down his first dunk and splash his first 3-pointer.

The five-time All-Star finished 3-for-8 on 3-pointers and 7-for-18 overall from the field. He also had three rebounds, one assist and one block following a 941-day absence that included a ruptured right Achilles in a comeback attempt before the 2020-21 season.

Inspired by Thompson's return, the Warriors led by as many as nine points in the first quarter, then 24 in the third before the Cavaliers, seeking a third win in their last four games, made things interesting in the final period.

A pair of 3-pointers by Rajon Rondo helped the visitors get within 85-75 with 5:47 to go before Thompson's third 3-pointer of the night, with 3:45 remaining, helped Golden State keep the Cavaliers at arm's length.

Curry shot 4-for-11 on 3-pointers on a night when he and Thompson combined for seven of Golden State's 10 threes in the team's 42 attempts.

Jordan Poole had a pair of 3-pointers among his 14 points off the bench, while Andrew Wiggins added 10 for the Warriors, who swept the two-game season series.

Draymond Green, battling a tight left calf, started the game as a tribute to Thompson's comeback. He committed an intentional foul seven seconds into the contest so that he could be removed, and he never returned.

Lamar Stevens had 17 points to pace Cleveland, which was making its second stop on a six-game Western swing. The Cavaliers must endure the second half of a back-to-back Monday night at Sacramento.

Rondo finished with 15 points and Jarrett Allen 12 to complement seven rebounds. Evan Mobley had 11 points for the Cavaliers.

Rondo connected on three of Cleveland's seven 3-pointers without a miss.