Kipruto has ruled the half marathon and road races and he is already planning to shift to the full marathon in 2024.

•Kipruto said he has been battling hamstring and hip joint injuries which ] slowed him down last season.

•He, however, noted that he has undergone treatment and is doing much better at the moment. 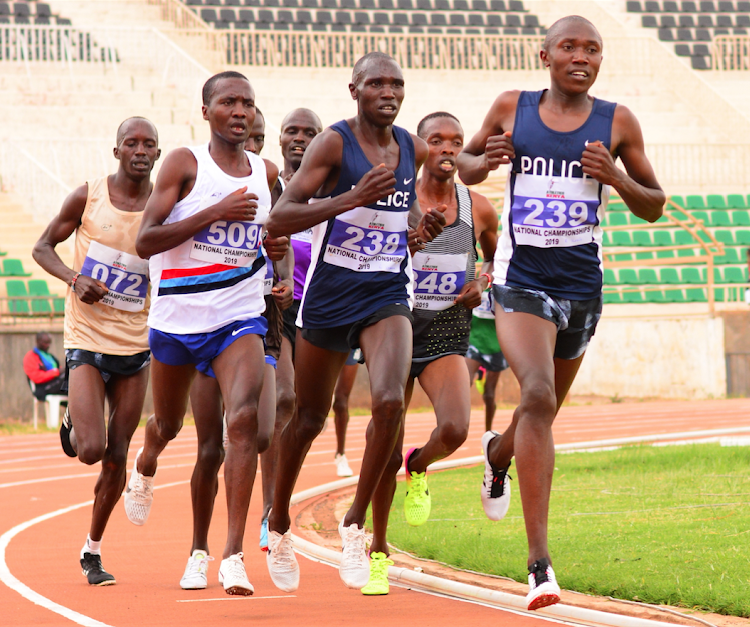 Rhonex Kipruto (239) in action with Geoffrey Kamworor and Alex Oloitiptip during a past 10, 000m race at Nyayo Stadium
Image: FILE

2019 World 10,000m bronze medallist Rhonex Kipruto is focusing on next year’s World Cross-Country Championships in Bathurst, Australia after what he termed as an 'unsuccessful 2022 season'.

Kipruto said he has been battling hamstring and hip joint injuries which ] slowed him down last season.

He, however, noted that he has undergone treatment and is doing much better at the moment. "I have already kicked off training ahead of next year's assignments."

Kipruto added that he is also eyeing a slot at next year’s World Championships in Budapest, where he hopes to compete in the 10,000m.

“This season has been very tough because I have been battling a bout of injuries which have taken a huge toll on me. I am looking forward to a busy season next year starting with the World X-country in February and  World Championships (August) among other races,” Kipruto said.

He added: “I have resumed training and things looking up. It's one step at a time for me and hopefully, I will pick up eventually."

Kipruto is also the current world 10km road race record holder  (26:24 minutes) and he has hinted at lowering his time come next year.

He said: “It feels good to have such honours…I don’t feel any pressure at all. I am hoping to lower that time.”

Kipruto has ruled the half marathon and road races and he is already planning to shift to the full marathon in 2024.

“Right now, I do not have any plans to run in the marathon but hopefully in 2024, I will have made up my mind.”

When asked about the 2024 Olympics, the 2018 World Under-20 champion said like any other athlete,  he would love to be part of Team Kenya in Paris.

"I will really want to compete in Paris but it all depends on my form at that particular time," he concluded.

Kipruto is the fastest man in the men's field with a personal best time of 26:24 which he ran in Valencia in 2020.
Sports
5 months ago

Rhonex to run less road races ahead of World Championship

The world 10,000m bronze medalist's last half marathon was earlier this month at the New York Half Marathon where he clocked 1:00:30 to clinch first ...
Sports
9 months ago
Post a comment
by ABIGAEL WAFULA
Athletics
14 November 2022 - 05:00
Read The E-Paper