The CDF congratulated Sgt Jepkosgei for making the country proud on the global stage.

•Her promotion was effected by Chief of Defence Forces (CDF) General Robert Kibochi at the Defence Headquarters in Nairobi on Tuesday. 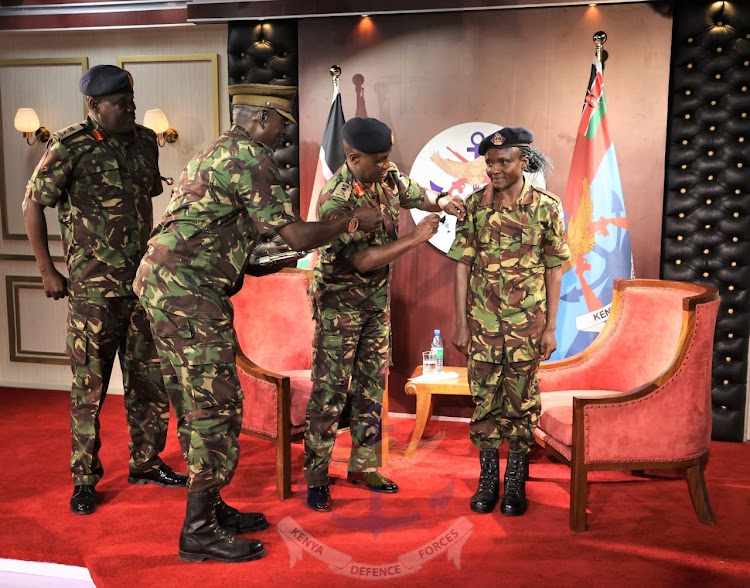 Kenyan marathoner Joyciline Jepkosgei has been promoted to the rank of sergeant in the Kenya Defence Forces following her second-place finish at the 2022 London Marathon.

She was awarded the three-star investiture by Chief of Defence Forces (CDF) General Robert Kibochi at the Defence Headquarters in Nairobi.

A corporal until her promotion on Wednesday, Jepkosgei was honoured a day after arriving from London alongside London Marathon champion Amos Kipruto and world marathon record holder Eliud Kipchoge.

Kibochi congratulated Jepkosgei for making the country proud on the global stage.

“We are very grateful for your continuous hard work and for representing Kenya and KDF well. We wish you the best as competing at such high levels requires a lot of hard work and determination,” Kibochi said. “I am confident that you will continue doing better since you are still young.”

Jepkosgei finished second in London on Sunday after clocking 2:18:07 to relinquish the title she won last season.

Jepkosgei described her promotion as an honour, saying: “I must appreciate the efforts that the Kenya Defence Forces have taken to look after athletes.”

The occasion was witnessed by the Commander Kenya Army Lieutenant General Peter Njiru and Assistant Chief of Defence Forces in charge of Personnel and Logistics Major General Muthuri Kiugu.

"I'll now focus on recovery as I internalise my performance in Berlin. But the most important thing is that I am healthy and will be around for some ...
Sports
1 month ago