The government must do more to produce world champions

•Hopefully, his performance will also spur the government to invest more in sports.

•It, therefore, behoves the government to borrow the pertinent lessons from Ineos, Nike and Maurtens AB on how to make an athlete successful. 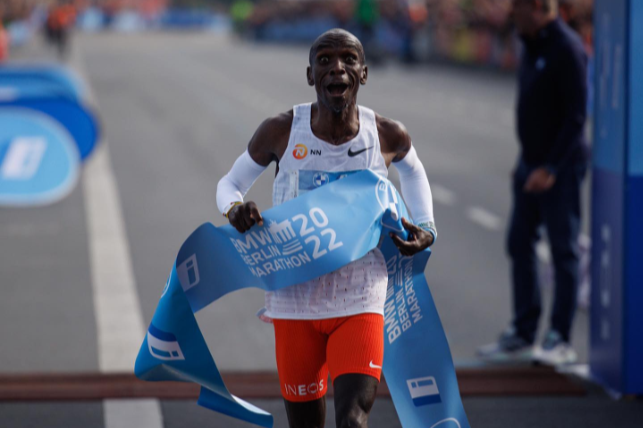 Eliud Kipchoge gestures as he crosses the finish line to win the 2022 Berlin marathon in a record-breaking time of 1:01:09 on Sunday, September 25.
Image: ELIUD KIPCHOGE.

On Sunday, Kenya took the world by storm after marathon legend Eliud Kipchoge made another breakthrough in the cut-throat world of athletics.

Kipchoge sprang to unprecedented heights and made the nation proud when he blazed to a new world record of 2:01:09 at the Berlin Marathon.

The athletics icon shed off an astonishing 30 seconds from the record he previously set in the German capital in 2018.

The father of three, manifested quality and class, setting a blistering pace along the flat inner-city course right from the off to obliterate the field on his way to glory.

Kipchoge, who turns 38 in November has now conquered 17 out of 19 marathon races he has run thus far.

He previously won the Berlin Marathon in 2015 and 2017 and his victory on Sunday brought him at par with Ethiopian Haile Gebrselassie, who hegemonized the race from 2006-09.

Hopefully, Kipchoge will replicate his outstanding form when he takes another stab at the upcoming Paris 2024 Olympic Games, where he will be eyeing an unprecedented third Olympic marathon title.

The milestone he set on Sunday is an inspiring story for the upcoming generation of Kenyan athletes who will draw on his resilience and determination to punch above their weight in their different pursuits.

Hopefully, his performance will also spur the government to invest more in sports.

Kipchoge's success attests to the dizzying heights Kenyan athletes can achieve with adequate support and a conducive atmosphere provided for performance.

Success can't be achieved in a vacuum. As we speak, the athlete enjoys massive financial trapping from respectable global blue chip companies, including INEOS, the NN Group, Nike, Maurten and Isuzu.

The petrochemicals giant, Ineos, owned by British tycoon Sir Jim Ratcliffe, entered into a performance partnership with Kipchoge in January.

Ineos and NN Running Team partnered with Kipchoge in 2019 for the 1:59 Challenge in Vienna, where the Kenyan wrote a new chapter in history as the first runner to ever complete a full marathon in under two hours.

This year, Nike, unveiled Kipchoge’s footwear collection, setting him apart as a global sports star, after committing to manufacture the Pegasus 37 as well as the AlphaFly Next shoes.

Besides being embroidered in the Kenyan flag colours, the shoes are emblazoned with Kipchoge's name and 1:59 to celebrate his sub-2 hour marathon run.

With the deal, Kipchoge joins a rare list of world luminaries who have previously penned shoe and apparel deals with Nike.

Sports supplements manufacturer, Maurtens AB, also penned a contract with the Kenyan star to provide drinks that are rich in carbohydrates.

It, therefore, behooves the government to borrow the pertinent lessons from Ineos, Nike and Maurtens AB on how to make an athlete successful.

The help provided by the government should equally be spread across all sports disciplines. For years, the government has plunged vast resources into athletics while doing very little to promote other sports.