•Norandrosterone is prohibited under the Anabolic Androgenic Steroids and is a non-specified substance prohibited at all times.

•The duo joins the growing list of Kenyan athletes already suspended or banned this year for anti-doping violation. 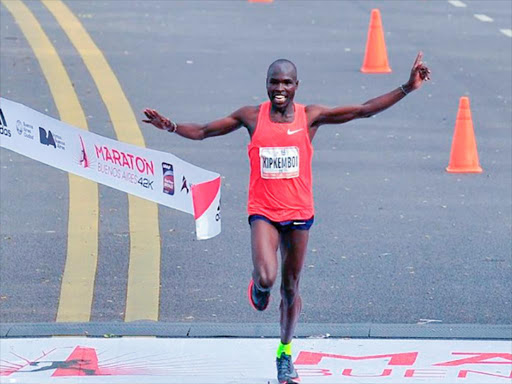 Kenya’s Saina Kipkemboi thrashed the course record of the 34th edition of the Buenos Aires Marathon that was held on Sunday (23) in Buenos Aires, Argentina /COURTESY

The AIU said out-of-competition samples from the two marathoners resulted in positive tests for 19-Norandrosterone (19-NA), a metabolite contained in nandrolone.

Nandrolone is prohibited under the Anabolic Androgenic Steroids and is a non-specified substance prohibited at all times.

According to the AIU statement, Korir’s sample — provided in Kapsabet on August 17 — was taken for analysis at the WADA accredited lab in Lausanne, Switzerland where it tested positive for the presence of 19-Norandrosterone.

The 2018 Nanjing Marathon champion pleaded guilty to the offence and had his ban reduced by a year.

“On September 22, 2022, the athlete returned a signed admission of Anti-Doping Rule Violations and Acceptance of Consequences Form.

“The Athlete shall therefore receive a one (1) year reduction in the asserted period of ineligibility pursuant to Rule 10.8.1 based on an early admission and acceptance of sanction,” the statement read.

Korir has also competed in other races including the Istanbul, Padova and Dakar Marathons.

On the other hand, Saina’s sample, taken on August 18 in Eldoret, also tested positive for the banned substance.

Following his early admission, his sentence has also been reduced by one year, resulting in a period of ineligibility of three years beginning September 9.

Besides his results being nullified, Saina will forfeit any medals, points prizes titles, awards and appearance money awarded since August 17.

He clinched the Buenos Aires Marathon in 2018 and took a stab at the Rotterdam and Milano Marathons.

The duo joins the growing list of Kenyan athletes already suspended or banned this year for anti-doping violations.

AIU said in a statement that the Kenyan pleaded guilty to the doping charges and her suspension will run from April 2022 to February 2023.

“The AIU, the Athlete and WADA subsequently entered into a Case Resolution Agreement by Rule 10.8.2 ADR under which the athlete acknowledges that she committed ADRVs under Rule 2.1 and 2.2 of the ADR,” read the AIU statement in part.

"Considering how promptly the athlete admitted the anti-doping rule violations upon notification, the parties agree that the period of ineligibility shall be backdated.”

Kasait secured a 12th-place finish in the 5,000 metres final at the 2020 Tokyo Olympics but her result has since been erased from the records after she tested positive.

Kasait rose to the limelight after stunning the Rio 2016 silver medalist Hellen Obiri to win the 5,000m race at Kenya’s trials.