Kipchoge breaks own record, vows to shatter it again

Kipchoge blazed to a new world record of 2:01:09 at the Berlin Marathon on Sunday

•Kipchoge, 37, capitalized on the ideal weather conditions to destroy the field in a dominant fashion.

•In the women's race, Ethiopia's Tigist Assefa ran the third fastest time in history to set a course record of 2:15:37.

•In the women's race, Ethiopia's Tigist Assefa ran the third fastest time in history to set a course record of 2:15:37. 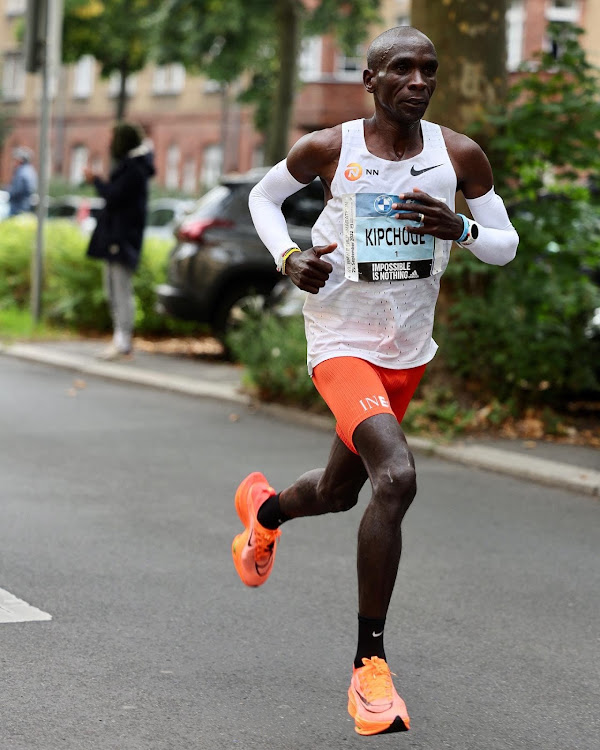 Eliud Kipchoge on his way to breaking the world marathon record in Berlin
Image: NN RUNNING 2

Kenyan marathon legend Eliud Kipchoge has said he still possesses the mojo to pull off another masterstroke in future races like he did in Berlin on Sunday.

Kipchoge capitalised on the ideal weather conditions to destroy the field in a dominant fashion, shedding off an astonishing 30 seconds from the previous record — the greatest of all time over 26.2 miles.

Fielding questions from the media in a post-race interview, Kipchoge pledged to unpack more surprises in future races.

“There’s still a lot more energy left in my legs. I hope the future is still great,” Kipchoge said.

“My legs and my body still feel young. But the most important thing is my mind, and that also feels fresh and young. I’m so happy to break the world record.”

Kipchoge said he will take time off to celebrate his landmark win as he ponders his next move.

"Let us plan for another day. I will celebrate this record and see what happens next," Kipchoge said.

The Kenyan was in a class of his own, setting a blistering pace along the flat, fast inner-city course right from the off.

He led wire-to-wire and charged to the finish line almost five minutes ahead of compatriot Mark Korir who wrapped up second in 2:05:58 with Ethiopian Tadu Abate fading off to a distant third in 2:06:28.

Powered by his three pacemakers, Kipchoge stormed through the 5km split in 14:14, exactly 13 seconds inside the world record pace. Ethiopians Guye Adola and Andamlak Belihu tagged along.

The Kenyan and the Ethiopian pair then hit the 10km mark in 28:22 and by 15km, they were a minute faster than the world record pace Kipchoge set at the 2018 race in Berlin.

The momentum of the pace tapered off over the next five kilometres with the pacemakers dropping off the course at 25km.

Around the 26km split, the Ethiopian pair eventually ran out of steam and fell behind the gallant Kenyan who was now on pace to shatter the world record.

He appeared to struggle at 40km but maintained a last-minute burst on the home stretch.

Kipchoge previously won the event in 2015 and 2017 and his victory on Sunday equaled the achievement of Ethiopian icon Haile Gebrselassie, who dominated the race from 2006-09.

With the victory, Kipchoge has gone down in the annals of history as the fifth person to ever break their own world record after legendary Briton Jim Peters, Australian Derek Clayton, Moroccan-born Khalid Khannouchi of the United States and Haile Gebrselassie of Ethiopia.

The first human to run the distance in under two hours, Kipchoge will be eyeing an unprecedented third Olympic marathon title in Paris in 2024.

In the women's race, Ethiopia's Tigist Assefa ran the third fastest time in history to set a course record of 2:15:37.