•Chebet's next focus is the Lausanne Diamond League on August 29, where she hopes to better her time. 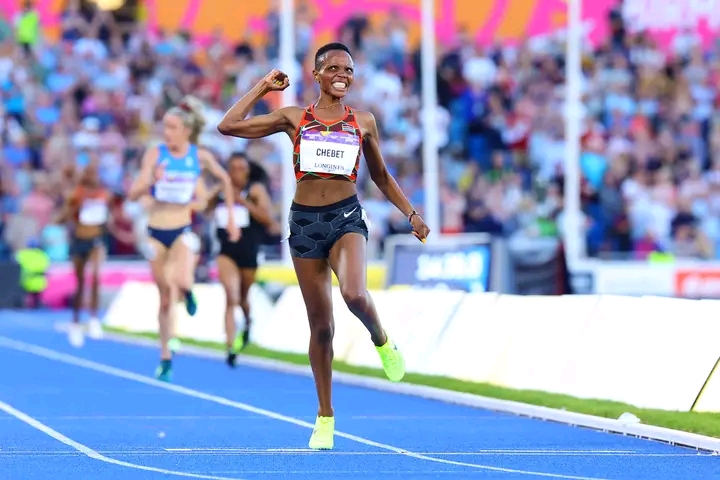 Newly-crowned women's 5000m Commonwealth champion Beatrice Chebet says a burning urge to step into the shoes of compatriot Hellen Obiri spurred her to eminence at the Alexander Stadium in Birmingham on Sunday.

Chebet, 22, hit the heights for the coveted gold barely a week after securing silver at the World Athletics Championships in Oregon where she emerged second behind Ethiopian Gudaf Tsegay.

“I remember I was privileged to discuss my career with Hellen Obiri at the Gold Coast Games in 2018. She told me she is nearing her sunset years and so there was a need to get upcoming athletes to follow in her footsteps,” Chebet revealed in a post-race interview.

“Obiri told me I was among those with the potential to take the mantle and emulate her performance on the global stage as long as I remain humble and committed.”

During the Gold Coast 2018 Commonwealth Games, Obiri led compatriot Margaret Kipkemboi in a Kenyan sweep for gold and silver in the women’s 5000m final.

Scot Eilish McColgan was the darling of the crowd heading into Sunday's showdown and had been fancied to replicate her feat at the games two days ago when she obliterated the field to storm to the 10,000m gold.

McColgan, 31, beat Irine Cheptai of Kenya in the 24-lap event to take the title in a time of 30:48.60 and she had hoped to pull off another surprise on a Kenyan competitor.

Chebet, however, altered McColgan's script at Alexander Stadium when she gushed to the front on the final bend and pulled away to the gold in a season-best of 14:38.21.

“McColgan is a worthy competitor and I knew she would pose a big challenge in the race. I was in good shape and felt confident about running away with the title. I knew I was going to beat her in the long run,” Chebet said.

With just 350m to run, Busienei dashed to the fore albeit momentarily just to set the pace for the leading pack.

Initially running wide on the bend, Chebet ultimately caught Busienei along the home straight and breezed past her.

By the time she left the curve, it was the diminutive Kenyan against the clock and the stands of Alexander Stadium erupted into raucous applause as she whirled and classically blazed to the finish line.

Behind her, McColgan squared off and then whizzed past Busienei for silver.

“It's been a brilliant year for me — gold at the Africa Championships, silver at the World Championships in Oregon and gold at the Commonwealth Games in Birmingham. This reflects well in my career,” Chebet said.

Chebet said her conquest in Birmingham was the fruit of the tireless effort she had thrown into her preparations.

“My success wasn't by mere chance. I worked extremely hard for the medals and it soothes my heart to know that I've made the country proud. I thank each and everyone who prayed for my success in Birmingham,” she said.

Chebet's next focus is the Lausanne Diamond League on August 29 where she hopes to better her time.

Post a comment
WATCH: The latest videos from the Star
by TONY MBALLA
Athletics
09 August 2022 - 05:00
Read The E-Paper