B EST YET TO COME

He dedicated his silver medal to his coach Erick Kogo based in Iten, Elgeyo Marakwet County.

• This was a good achievement, coming after a poor show at the World Championships in Oregon, where he finished 10th overall in 5,000m — Simiu 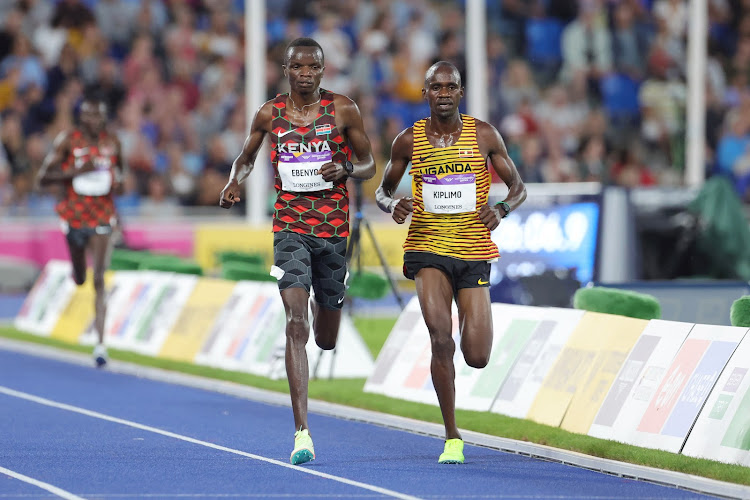 Daniel Simiu and Uganda's Jacob Kiplimo in action during the 10,000m race at the Commonwealth Games in Birmingham
Image: FILE

Daniel Simiu is hoping to compete in a number of Diamond League meetings after finishing second in the 10,000m race at the Commonwealth Games in Birmingham, England.

He dedicated his silver medal to his Iten-based coach Erick Kogo.

“For me, this is a big achievement, especially coming a few months after I won silver at the Africa Athletics Championships," he said.

"The future is promising and I would like to dedicate the silver to my coach because he is the source of inspiration."

He said he hopes to compete at the Monaco and Zurich Diamond League meetings before closing the season.

Kogo said the medal was a good boost for Simiu. "This was a good achievement, coming after a poor show at the World Championships in Oregon, where he finished 10th in 5,000m.

"We have organized two Diamond League meetings for him. That is Zurich and Monaco,” said Kogo.

The coach explained that the medal did not come easy, especially after running so many races within the season and joining the National Police Service (NPS).

"Simiu had only one month of training after joining the Police Service. He has generally been multi-tasking between the Police training and major events like the Kip Keino Classic, national trials, World Championships and now the Commonwealth Games," he added.

Kogo said since Simiu did not have an invite to compete in any major race, they had to talk to his manager to send letters of invitations to the Police to be allowed to train.

“When he qualified to compete at the World Championships and Commonwealth Games, he got a chance to train but it was too short,” added Kogo.

Despite finishing 10th in 5,000 m in Oregon, the tactician advised him not to give up but focus on the Commonwealth Games in Birmingham.

“I knew he had a chance to medal in 5,000m in Birmingham. I told him to do everything in his powers to exorcise the Oregon ghosts and ensure he finished on the podium,” he added.

Simiu promises to take the fight to Budapest next year

• The last time Kenya won gold in the event was in the 2002 Commonwealth Games in Manchester courtesy of Wilberforce Talel.
Sports
6 days ago

Battle of Kasarani beckons in fight for Oregon, Birmingham tickets

The top two finishers in every category automatically punch their tickets to the two competitions, further raising the stakes at this weekend's ...
Sports
1 month ago