Mbevi promises a thrilling show in the 400mH final

Mbevi settled for the third position in his heat clocking 49.99 to cross the finish line.

• “The race was not bad. I did not maximise on my strength because that was just like a warm up. I am thankful I qualified. My plan is to bounce back stronger in the finals. Let the best man win,” Mbevi said.

• His counterpart, African Championships Bronze medalist Wiseman Were led in his heat by clocking 50.03 ahead of Nigeria’s Nathaniel Ezekiel who finished second in 50.38. Canada’s Metivier Malik placed third in 51.54. 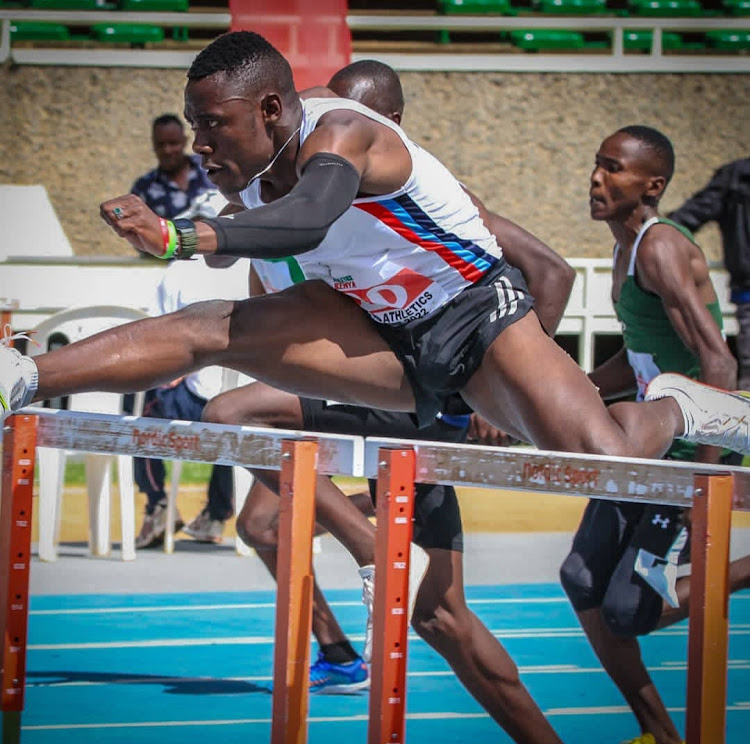 Wiseman Were in action during a previous event
Image: COURTESY

Four-time national champion William Mbevi has promised to make a strong comeback in the final on Saturday at the Alexander Stadium in Birmingham.

He said he was only warming up during the heats in preparation for the finals where he will unleash the beast in him.

“The race was not bad. I did not maximise on my strength because that was just like a warm-up. I am thankful I qualified. My plan is to bounce back stronger in the finals. Let the best man win,” Mbevi said.

He added: “Victory must come back to our country at all cost. Wiseman Were and I must make sure we reclaim the lost glory.”

Kenya has not medaled in the event at Club Games since the 1994 edition in Victoria, Canada, where Gideon Biwott and Barnabas Kinyor won silver and bronze respectively.

Were, who is the African bronze medalist, led in his heat in 50.03 secs ahead of Nigeria’s Nathaniel Ezekiel(50.38) and Canada’s Metivier Malik ( 51.54) who placed second and third respectively.

Were hinted that his target is to finish on the podium. He said he needs a good recovery time in preparation for the finals.

“It was my prayer that I qualify and I thank God. The next thing in line is I get enough rest and then I’ll be ready. I want to go for a podium finish because anything is possible. There is nothing hard,” Were said.