Will Chelangat, Cherop live up to expectations

•Ethiopia's Tsiyon Atsebe and Bertukan Welde will be hoping to spoil Kenya's party in the seven-and-a-half-lap race.

•Ethiopia last won the event during the 2016 edition in Bydgoszcz through Beyenu Degefa, who coincidentally is the world record holder (8:41.76). 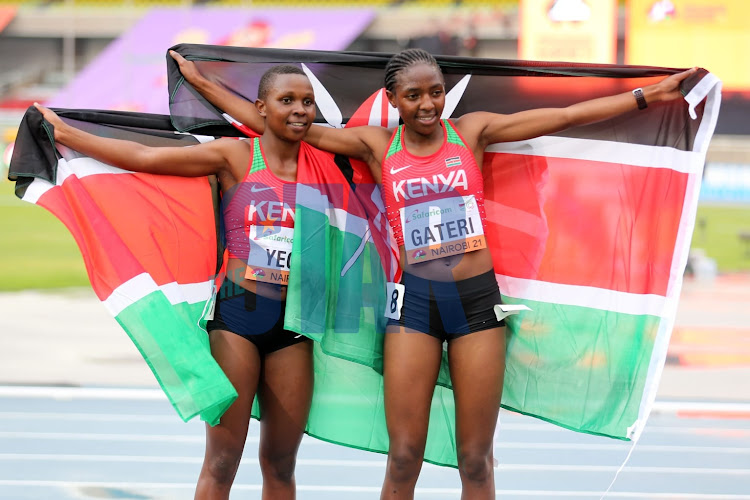 Zenah Yego and Teresiah Gateri celebrate their win during the world Athletics U20 championships being held at the Moi International Stadium Kasarani on August 19, 2021.
Image: FREDERICK OMONDI

Team Kenya are hoping to defend their 3,000m title as Betty Chelangát and Nancy Cherop take to the field today at the World Under-20 Championships in Cali, Colombia.

Ethiopia last won the event during the 2016 edition in Bydgoszcz through Beyenu Degefa, who coincidentally is the world record holder (8:41.76). Atsebe has a personal best of 8:44.82 which she attained during last month’s Diamond League in Rabat.

Men’s 5,000m final will be next in line at 1:25, where Samuel Kibathi and Nelson Mandela will have the mandate to defend the title that was won by Benson Kiplagat in Nairobi, last year.

Like the women's race, the presence of Ethiopians, Ugandans, and Eritreans is likely to complicate matters. Ethiopia’s Addisu Yihune is the man to watch as he is the fastest junior this year with a personal best of 12:58.99. Gebeyehu Belay, also from Ethiopia, has a personal best of 13:25.04.

Uganda’s Peter Maru and Rogers Kibet with personal bests of 13:07.42 and 13:14.68 will also be hoping to bag medals for their country.  From Eritrea, Habtom Samuel and Merhawi Mebrathu will be seeking to also make their country proud and can't be ruled out.

Tuesday’s long-distance races are definitely the ones to watch as each athlete hopes to make their country proud.