Focus on Omanyala as sprints spring to life in Birmingham

He has the option of bulking under the strain of mounting pressure or allowing its enormous force to buoy him to unprecedented heights.

•The 26-year-old National Police Service officer has been limbering up for an awe-inspiring show in Birmingham.

•He will hope to emulate his fete in Eugene where he surmounted a visa hitch to cruise to the semi-final of the 100m, making him the first Kenyan to achieve the milestone. 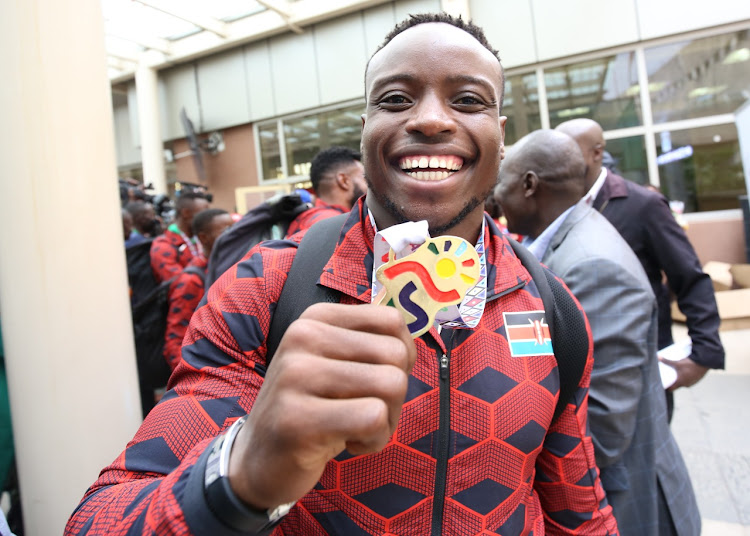 Team Kenya athlete after their arrival from the Africa championships in Mauritius.
Image: PSCU

Africa 100m champion Ferdinand Omanyala is expected to light up the refurbished 30,000-capacity Alexander Stadium when the sprint events come alive this morning.

The Kenyan sprint sensation is on record having vowed to bounce back strongly from his woes at the World Athletics Championships in Oregon, where he fizzled out to a disappointing finish in the semi-finals.

Currently, with a PB of 9.77 seconds in Nairobi last September, the eighth fastest man of all time in the 100 metres, said he is training his eyes on an improved time at the Birmingham 2022 Commonwealth Games.

“I'm looking forward to better the time that I ran here and enjoy and have fun,” Omanyala said in an earlier interview with Capital Sports.

He will hope to emulate his feat in Eugene, where he surmounted a visa hitch to cruise to the semi-final of the 100m, making him the first Kenyan to achieve the milestone.

And, indeed, going by his recent tweets, the 26-year-old National Police Service officer has been limbering up for an awe-inspiring show in Birmingham.

“Supporting the Rugby Sevens as I prepare for my race on August 2 for my Commonwealth debut. The fans here made it feel like home and I can't wait for the excitement come Tuesday,” Omanyala tweeted on Sunday.

“Every challenge you face today makes you stronger tomorrow. The challenge of life is intended to make you better, not bitter. Persistence and resilience only come from having been given the chance to work through difficult problems. No matter how much it falls on us, we keep moving,” he tweeted again on June 17.

The Chemistry student at the University of Nairobi is most definitely aware he shoulders the great expectations of an adoring East African nation.

He has the option of bulking under the strain of mounting pressure or allowing its enormous force to buoy him to unprecedented heights.

Omanyala admitted that he was under the pump in Oregon to make the country proud, but managed to contain the pressure nonetheless.

“There has been a lot of pressure and attention on me but I always say it's all on you. This is your life and you can't let other people control it.”

“As humans, we tend to succumb to pressure in some situations but for me, I always say just smile, relax and everything else will fall in place.

He described his season as wonderful saying he had achieved more than he had envisioned.

“This has been a great season. We started way back in February with the indoor games, where I broke the national record.

“I then went to the Africa Championship and bagged two gold medals in the relay and 100 metres which was a historic moment for Kenya..”

“No regrets, some positivity and thanking God for coming this far.

Currently, Birmingham has a maritime temperate climate that warms up the air and Omanyala is expected to capitalize on the favourable conditions akin to Nairobi's to storm into the medal podium.