The British sprinter withdrew from the Commonwealth Games after suffering an injury at the World Championships. 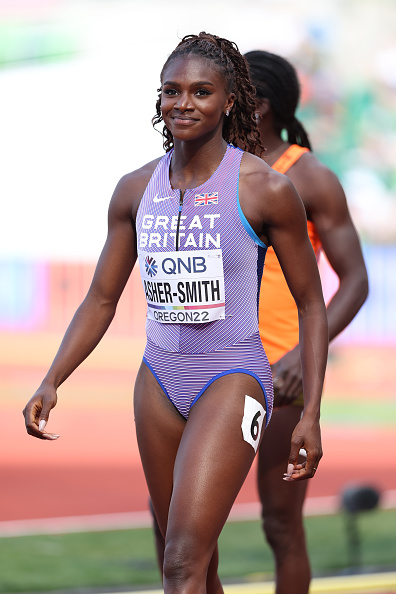 Dina Asher-Smith has been selected to defend all three of her titles at next month's European Championships.

The British sprinter withdrew from the Commonwealth Games after suffering an injury at the World Championships.

The 26-year-old suffered a "light hamstring strain" during the women's 4x100m relay final.

Although Asher-Smith was unable to retain her 200m world title, she did manage to win bronze in Eugene, Oregon. Fellow World Championship medallists Jake Wightman, Keely Hodgkinson, Laura Muir and Matt Hudson-Smith have also been named in a 115-strong GB squad.

However, Wightman will compete in the 800m rather than the 1500m, in which he beat Olympic and European champion Jakob Ingebrigtsen last week to become world champion.

Katrina Johnson-Thompson and Tokyo 2020 bronze medallist Josh Kerr opted not to be considered for the Europeans, which take place from 15-21 August.

Weir, an eight-time London Marathon winner, led by more than 90 seconds with six miles remaining and looked set for a first Commonwealth marathon medal when he suffered a puncture.

"The better man didn't win, I take my hat off to Dave," said Smith. "Your majesty the Queen, give David a knighthood; that man deserves it."

Weir, who has won six Paralympic gold medals and six world titles, kept pushing to the finish and crossed the line in seventh, almost 25 minutes after Smith.

"It's bittersweet for me. Dave got a flat, he had me. By mile six he dropped me," Smith said.  "He deserves gold, I should have got silver, but these things happen."

"I had a lot of confidence coming in here, I thought if I take a spare I am going to jinx myself.

In the men's race, Uganda's Victor Kiplangat claimed gold in two hours, 10 minutes, and 55 seconds, despite briefly going the wrong way in the closing stages.

The 22-year-old was forced to double back after missing a turn but still won by 94 seconds from Alphonce Simbu of Tanzania, with Michael Githae of Kenya in third.

Australia's Jessica Stenson, who won bronze in 2014 and 2018, raced clear in the closing couple of miles of the women's race, to take the gold medal by 24 seconds from Kenya's Margaret Muriuki. Defending champion Namibia's Helalia Johannes finished third.