Ngeny credits Kinyamal ahead of Birmingham

The Global Sports Communication based athlete clocked 1:44.05 in the national trials at Moi International Stadium, Kasarani over the weekend vanquishing Festus Lagat who came in fourth with a timing of 1:44.31.

• Since he started participating in International competitions, Ngeny has not managed to secure a medal but this time round, he aims to change the narrative 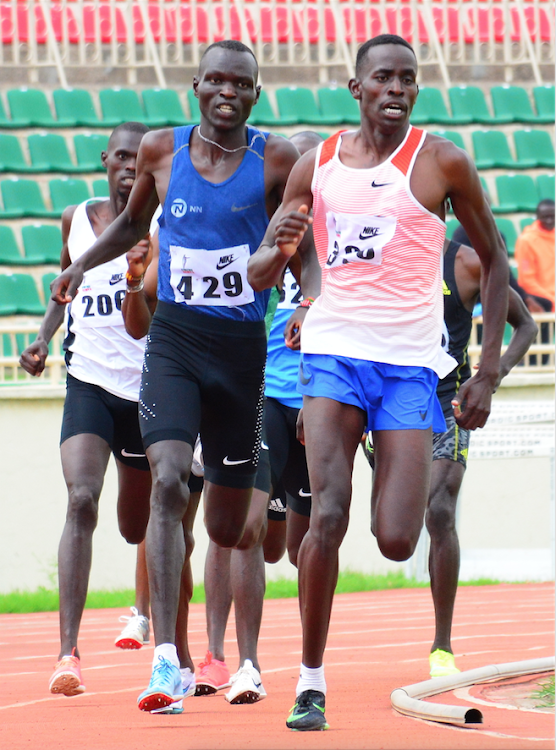 Elias Ngeny leads a pack of athletes in the men's 800m finals during the Tokyo Olympics pre-trials at Nyayo Stadium.
Image: ERICK BARASA

Commonwealth Games-bound 800m runner Elias Ngeny has credited Wycliffe Kinyamal for his qualification to the Club Games slated for next month in Birmingham, United Kingdom.

The Global Sports Communication athlete clocked 1:44.05 during the national trials at Moi Stadium, Kasarani over the weekend, to finish third in a race won by Kinyamal with Emmanuel Wanyonyi second.

Ngeny expressed his disbelief in his performance in a race that has given him an opportunity to dine with the 'big boys.

"I can't believe this. It is something I never expected. But I am equally excited. I am also happy for my friend and training mate, Kinyamal," said Ngeny.

"I was far much behind but when  I saw him (Kinyamal) increase his speed, I got the morale to push on and that was how I finished third."

The 26-year-old, against all odds, won last year's Athletics Kenya Pre-Trials to the 2020 Tokyo Olympic Games held at Nyayo Stadium, by clocking 1:43.84.

Since he started participating in international competitions, Ngeny is yet to medal. However, he will be seeking to change the narrative by returning home with a medal from the UK.

"I want to go and perform well... My goal is to represent my country in the best way possible and come back with a medal," Ngeny said.

Ngeny also noted that the 800m race is always tough and was, therefore, anxious about how he would perform at the trials, going by the calibre of opponents enlisted.

"I believe everyone knows that the 800m race in Kenya is one of the toughest and this particular one was very competitive. I was tensed during the race but I could not let my chances slip. I started off with a good pace and it worked well for me," he concluded.

The 17-year-old will be  facing off against big names at Moi Stadium, Kasarani but is optimistic of a good performance as he prepares for more ...
Sports
3 months ago
by ABIGAEL WAFULA
Athletics
29 June 2022 - 05:00
Read The E-Paper