Aerodrome Road, situated near Nyayo Stadium, was renamed after the 1987 world marathon champion in honour of road race exploits. 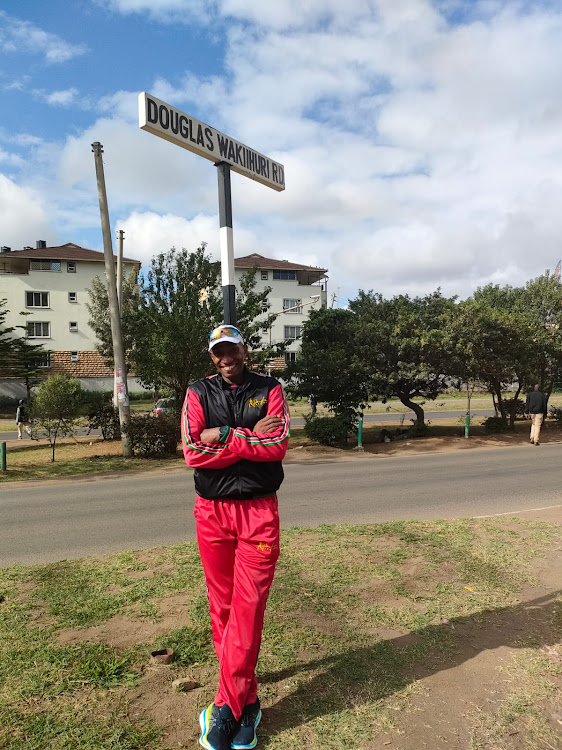 Marathon legend Douglas Wakiihuri poses next to a road sign bearing his name along the former Aerodrome Road
Image: HANDOUT

Wakiihuri says he is at a loss as to what could have motivated such an action and is hoping authorities get to the bottom of it.

"I don't know who would do this because I know there is a ban on scrap metal sales. There are many road signs around Nairobi so why would anyone target this particular one. I haven't followed up with the authorities but I hope they can get to the bottom of it," the 1987 world marathon champion said.

Aerodrome Road was in March this year renamed to Douglas Wakiihuri Road in honour of the marathoner who also clinched an Olympic silver at the 1988 Seoul Games.

In a motion moved by a member of the Nairobi County assembly Abraham Njihia, Wakiihuri was recognised as an icon who has inspired many to pursue athletics around the world.

"This Assembly urges the County Executive in conjunction with the Nairobi Metropolitan Services to rename Aerodrome Road to Douglas Wakiihuri Road in honour of the athletic icon who is regarded as one of the pioneers of marathon championship in Kenya," Njihia said.

The 1989 London Marathon was also conferred the "The Order of the Rising Sun, Gold and Silver Rays" by the His Majesty the Emperor of Japan, Naruhito in April last year before being conferred the “Order of the Golden Warrior" by President Uhuru Kenyatta.

The Olympic champion, a late addition to the women's team for the global showpiece, is seeking a podium finish at the World Championship in July.
Sports
7 months ago

Winners in both the men’s and women’s categories received Sh250, 000 as per Athletics Kenya’s road running regulations.
Sports
7 months ago
Post a comment
by OMONDI ONYATTA
Athletics
22 June 2022 - 16:26
Read The E-Paper