The Olympic champion, a late addition to the women's team for the global showpiece, is seeking a podium finish at the World Championship in July. 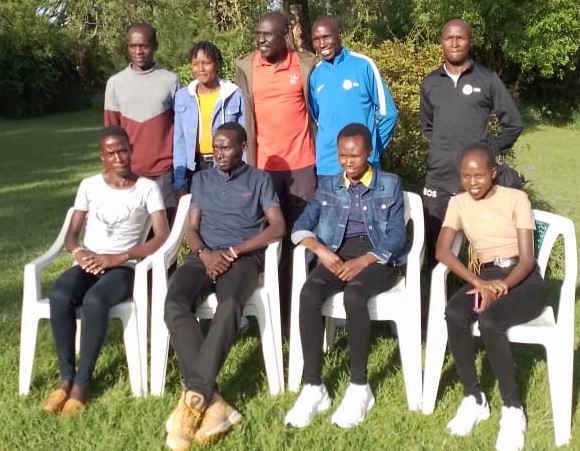 Peres Chepchirchir (far right sitting) during the unveiling of World championships marathon team in Eldoret. She said that her fans have been her pillar in her career as she sets to compete at the championships next month
Image: Emmanuel Sabuni

Olympic marathon champion Peres Jepchirchir says a podium finish at the World Championship in Oregon will be the perfect foundation upon which to pursue a second consecutive New York Marathon title in November this year.

"I am going there for a podium place. I don't want to speak much about the prospect of gold because I know the competition will be tough. I had been planning on running at the New York Marathon and a good performance in Oregon will no doubt motivate me to run even better in the United States," the World Half Marathon champion said.

Even though she had earmarked New York as her next race — after her pulsating victory at the Boston Marathon in April — Jepchirchir insists her entry into the World Championship marathon team will not affect her schedule for the rest of the year.

“Coming in late will not stop me from running well and better races in Oregon. I had initially wanted to run in New York but after some convincing and self-examination, I thought it better to join the team. I thank God for being part of Team Kenya once again. I must also thank Athletics Kenya for their support,” the Boston Marathon champion said.

Nonetheless, she was quick to dismiss assertions that she will be one of the favourites for the world title, owing to her impeccable record in past races.

"The team that we have is very strong and anybody among us can win the title. With athletics, you can never pinpoint one person as a favourite because anything can happen on the material day. Some mornings, you wake up and your body just refuses to work the way it should," the double World Half Marathon champion said.

Jepchirchir added: "Of course, everyone has his or her own weaknesses. No one is ever immortal. That is why I have to focus and intensify my training because there are so many good athletes coming up every other day."

Jepchirchir was also a late entrant to the women's marathon team for the 2021 Olympic Games in Tokyo, where she clinched gold in a 1-2 podium finish for Kenya, with Brigid Kosgei scooping silver.

The two were speaking over the weekend during a visit by the Athletics Kenya president Jack Tuwei ahead of next weekend's national trials at Moi ...
Sports
7 months ago

Winners in both the men’s and women’s categories received Sh250, 000 as per Athletics Kenya’s road running regulations.
Sports
7 months ago
Post a comment
by EMMANUEL SABUNI and OMONDI ONYATTA
Athletics
22 June 2022 - 05:00
Read The E-Paper