Chepkirui holds on to athletics as escape route from poverty

Commenting on her next career step, the World Under 20 champion has set sights on inheriting double Olympic champion Faith Kipyegon as the queen of the 1500m.

•The rising star clocked  4:16.28 to bag silver at the Senior Africa Athletics Championships in Reduit, Mauritius 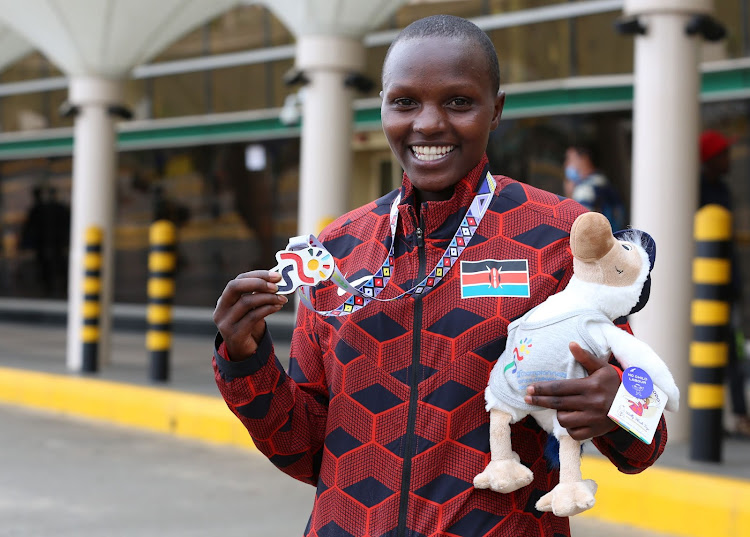 Newly-crowned Africa 1500m silver medalist Purity Chepkirui says she has fallen in love with athletics and considers it as a weapon to free her family from the shackles of poverty.

Chepkirui came to prominence in 2020 during pre-trials for the World Under 20 Championships at Nyayo Stadium during which she led the women's 1500m from start to finish.

The World Under-20 1500m champion has gone from strength to strength but admits it was that stunning debut performance that instilled self-belief.

"Everything has worked out well ever since I officially embraced athletics. I didn't know I could come this far but that performance at Nyayo Stadium was quite an inspiration. I saw athletics as a means for me to help my family and those around me improve their livelihoods," the Form Two student at Tiloa Mixed Secondary School in Nakuru County said.

Commenting on her next career step, Chepkirui has set sights on inheriting double Olympic champion Faith Kipyegon as the queen of the 1500m.

"I want to follow in the footsteps of Faith because she is a model athlete who has achieved so much in her career. She is talented and disciplined in all that she does. Obviously, she won't be in the game for long and so I want to be the next Faith Kipyegon," she said.

Chepkirui also spoke of her encounters with the senior athletes and how they have held her hand to stay afloat at the deep end of the pool as far as the senior ranks are concerned.

"They have been encouraging me to stay focused in school and not to forget to bury myself in books. Although I have not fully transitioned to the senior ranks, my performance in Mauritius has really solidified my belief that I can do even better when I eventually move to that level," she said.

The junior athlete added: "Back home I have my friend and training partner, Judith Kemunto, who we are always encouraging each other. We are always pushing ourselves to become better."

Chepkirui has now set sight on defending her World Under 20 title at the next edition in Cali, Colombia in August this year.

She is also hopeful of making Team Kenya for the World Championship in Oregon and the Commonwealth Games in Birmingham.

Chepkirui was among athletes treated to a grand reception on Monday afternoon at the Jomo Kenyatta International Airport on arrival from Mauritius after a successful outing.

Grand reception for Team Kenya as they return from Mauritius

On a wet Sunday morning, the Kenyan clocked 1:34:30 in first place, upstaging 2018 champion Yehualeye Beletew of Ethiopia who finished second in ...
Sports
7 months ago

Omanyala leads Team Kenya to gold in 4x100m in Mauritius

He was over the moon, tipping his hat off to his teammate for their dogged determination to fly the national flag high at the Cote D' Or National ...
Sports
7 months ago
Post a comment
by OMONDI ONYATTA
Athletics
15 June 2022 - 05:00
Read The E-Paper