FRUITS OF MY LABOUR

On a wet Sunday morning, the Kenyan clocked 1:34:30 in first place, upstaging 2018 champion Yehualeye Beletew of Ethiopia who finished second in 1:35:48.

•Sylvia Kemboi, making her competitive debut at the international stage, took bronze after clocking 1:39:40 in third 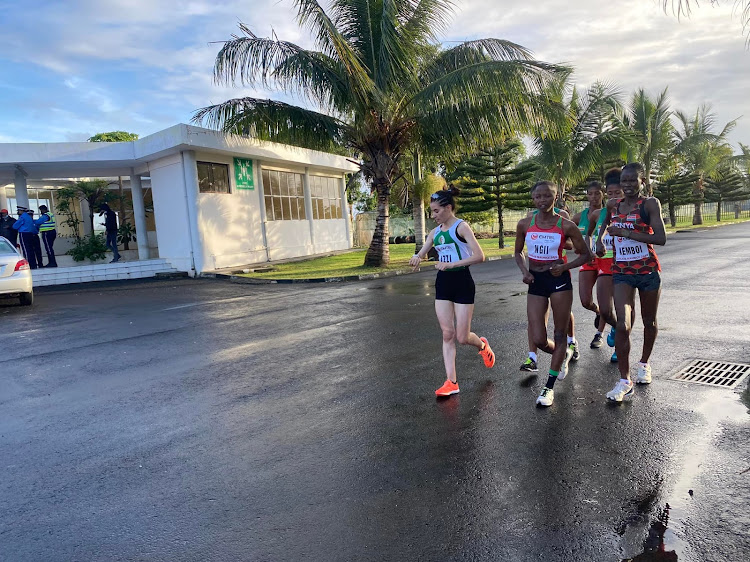 Emily Ngii and Sylvia Kemboi in action with other race walkers during the women's 20km race at the Senior Africa Athletics Championships in Mauritius
Image: HANDOUT

Kenyan race walker Emily Ngii says training in hilly areas was the secret weapon that clinched her the gold in the women's 20km walk at the Senior Africa Athletics Championships in Mauritius on Sunday morning.

Ngii was among three Kenyans to earn the country gold at the continental showpiece on the ultimate day of competition at Cote D'Or National Sports Complex.

Another Kenyan, Sylvia Kemboi, making her competitive debut on the international stage, took bronze after clocking 1:39:40.

Ngii says the win has motivated her for greater things ahead as she eyes a podium finish at the Commonwealth Games in Birmingham in August.

"I was not expecting to win but here I am. I am very happy to have won this gold medal. I thank God so much for enabling me to win. Now I want to win another gold medal at the Commonwealth Games in Birmingham and I know I can do it," she said.

It was double delight for Kenya in race walking as Samuel Gathimba also clinched gold in the men's 20km race walk, timing 1:22:01 ahead of South African Wayne Snyman (1:22:05) and Ethiopian Yohanis Algaw (1:22:21) in second and third respectively.

Gathimba, who won bronze at the World Race Walking Team Championships in Oman in March, credited the tough competition for pushing him all the way to the finish line.

He also paid homage to Kenyans back home for supporting the team through the competition.

"It was the tough competition that pushed me all the way to the title. I want to thank all my fans back home in Kenya for the support they have given me. That is who we are...we do wonders because we believe in God," Gathimba said.

On Saturday, Caroline Nyaga topped off a productive outing in Mauritius with a gold medal in the women's 10,000m.

Nyaga had earlier bagged a bronze in the women's 5000m in which fellow countrywoman, 2016 World Under 20 5,000m champion Beatrice Chebet, grabbed gold.

Team Kenya are expected back in the country at 11.20 am on Monday.

Omanyala leads Team Kenya to gold in 4x100m in Mauritius

He was over the moon, tipping his hat off to his teammate for their dogged determination to fly the national flag high at the Cote D' Or National ...
Sports
2 weeks ago

God made it possible, says Kiviasi after 4x100m gold in Mauritius

The sprinter further predicted that Kenya will soon be a force to reckon with in sprints, paying tribute to his countryman Omanyala for the renewed ...
Sports
2 weeks ago

As has been the case in many 100m races in the recent past, the sprinters had to endure a tense moments after a false start.
Sports
2 weeks ago
by OMONDI ONYATTA
Athletics
13 June 2022 - 05:00