KU athletics track to be upgraded in bid for World Championship 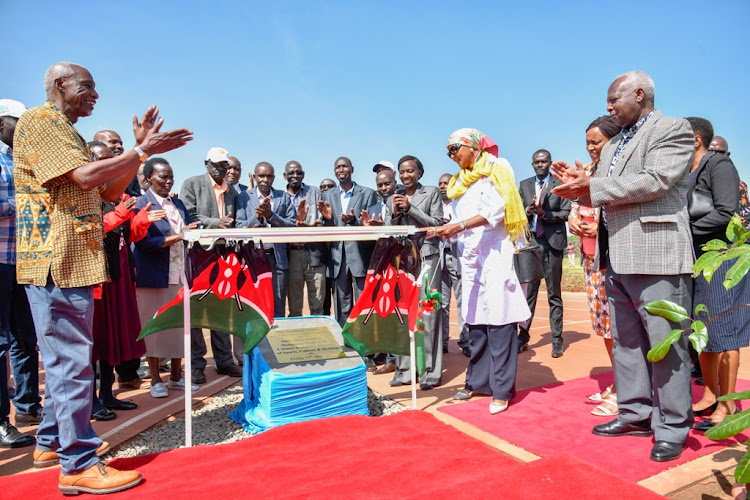 Sports Cabinet Secretary Amina Mohamed has promised that the newly-unveiled six-lane athletics track at Kenyatta University will be expanded to eight lanes as part of preparations for the World Championship in 2025.

Kenya is currently competing against Singapore and Japan for the hosting rights for the biennial championship and has earmarked the track as one of the warm-up areas for athletes should it succeed in its bid.

"We will be seeking more funds to add the two remaining lanes as we prepare to hold the mega athletics events in 2025. I have an obligation to make sure that it will be fully completed,” the CS said.

She added that the government will partner with institutions of higher learning to exploit sporting talents, including during the upcoming Africa University Games at the institution.

The 5-day event is expected to bring together at least 2,000 participants from 45 countries.

KU Vice-Chancellor Paul Wainaina said the event offers a golden chance for learners in local and regional universities to showcase their sporting prowess.

“These games are not just there for competitions. They started as two universities in Nigeria and Ghana just to make sure that there is a good relationship between them, back in 1951. After a while, the games expanded to Africa. This is to make sure that the young people meet and know each other,” Wainaina said

The VC also said the university has enough facilities to host the competitors, managers, and other officials as students will have to go back home after their exams.

Retired and upcoming athletes, led by former marathoners Simon Biwott and Douglas Wakiihuri, hailed KU for the initiative, saying that the track will help young athletes to train and become great champions in the future.

“This project is a clear indication that the government is committed to breeding and nurturing young talents who will in the near future fly our flag higher across the globe,” Wakiihuri said.

KU students welcomed the project saying that it will improve their athletic performance and experience.

“We have been facing a hard time while training on our playground and especially during rainy seasons but we are glad about the new modern facility and promise to perform exquisitely in the upcoming Africa universities games,” Ronald Wawire, a student at the institution, said.