The second edition of the run saw Bomet's Patrick Kipng'eno walk away with the men's crown as he timed 44:13.8 across the finish line in the men's 13km

•Kinyua said they are eagerly waiting to pay the respective winners 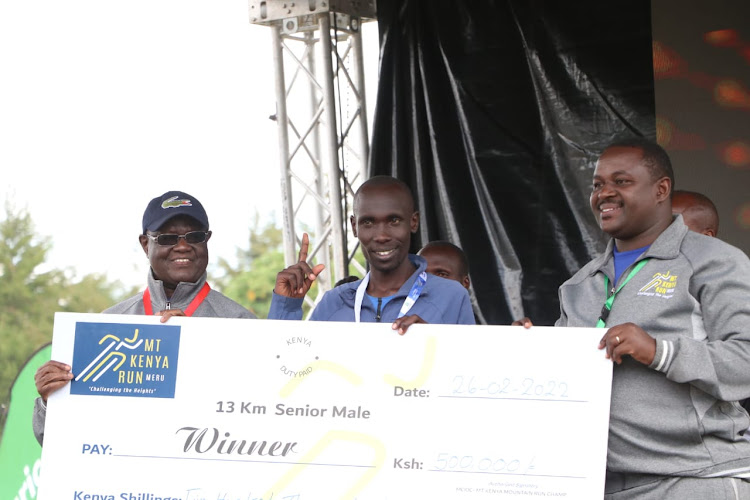 Mount Kenya mountain running chairperson Joseph Kinyua has called on all athletes who won the Mount Kenya Mountain Running Championships to come for their winnings.

Kinyua said they have finalised their anti-doping procedures and are now in a position to pay all the winners.

"Today, we have paid out Ksh 1,382,000 to the winners of the mountain race. This applies to those that have forwarded their bank details. Payment is by either cheque or Mpesa, depending on the amount," Kinyua said.

The second edition of the Mount Kenya Mountain Running Championship saw Bomet's Patrick Kipng'eno walk away with the men's crown as he timed  44:13.8 across the finish line in the men's 13km ahead of Charles Katul and Frederick Kamongole.

Kinyua said they are eagerly waiting to pay the respective winners.

"All prize winners, 1-10, in the mountain running championships, should text the following information to 0728706758: name; race category; ranking/position; bank and branch name. Adak has finalised their anti-doping procedures and now we are in a position to pay you," he said.

This year's winners — elite men and women — were expected to go home Sh500,000 richer whereas the overall prize money was Sh2 million.

The Mount Kenya Mountain Running Championship further sought to raise funds for the establishment of the Meru County Cancer Centre.

The race, postponed in 2021 due to the coronavirus pandemic, was flagged off by Meru governor Kiraitu Murungi and first lady, Priscilla.

The Bomet native, who also won the Mount Longonot championship in 2020, plans to compete in the men's 10,000m at Club Games and World Championship
Sports
4 months ago