The World Under 20 champion timed a season best of 1:45.01 and is now pumped up for upcoming competitions after his first-ever victory in Continental Tour Gold 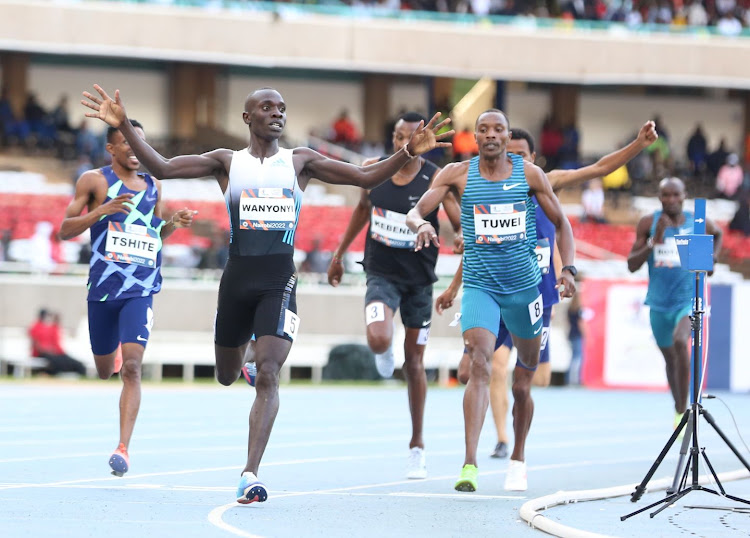 World Under 20 champion Emmanuel Wanyonyi says his win in the men's 800m at the Kip Keino Classic on Saturday was inspired by the words of World Indoor silver medalist Noah Kibet.

Wanyonyi said he spoke to the World Under-20 bronze medalist a day before the race and Kibet encouraged him to go for the top prize.

"If he had been here, it would have been a very competitive race. However, we talked and he told me he was not feeling well but nonetheless encouraged me to give it my best and gain my first Continental Tour victory," Wanyonyi said.

Wanyonyi said his expectations as far as the race is concerned had been fully met.

"This is my first time running at the Kip Keino Classic and it feels great to have won on my debut. That was what I was aiming for...to win the race. I wasn't so much focused on the time because then again if that was the case, I am sure I would have run faster," he said.

He is not yet decided on which other international assignments to tackle but has placed the Commonwealth Games and the Diamond League as some of his dream competitions.

"I would have to discuss with my coach the next stop. However, ideally, I would love to compete at the Commonwealth and the Diamond League...we will see. I feel at the peak of my physical fitness and I am confident of achieving greater things in the future ahead," Wanyonyi said.

Meanwhile, World Indoor 800m specialist Collins Kipruto, who also ran in the race but did not finish, said his aim was to simply improve on speed as he prepares for upcoming international competitions.

"Speed has been one of my weak areas for a while now and have been working on improving it. Basically, today I wanted to see how much more work I need to do, and am happy that I am getting better. Now I am all set for upcoming competitions," Kipruto said.

He added: "I want to fight for my place in Oregon. I will also be running in the Diamond League series."

Africa's fastest man said he had promised to give a show to the fans and delivered on the same with a world lead of 9.85 at Moi Stadium, Kasarani
Sports
1 week ago

The Rio Olympics  silver medalist has been out of action for a while but seemed at home when he threw a season best of 79.59 at Moi Stadium, Kasarani
Sports
1 week ago
by OMONDI ONYATTA
Athletics
10 May 2022 - 05:00