The 2016 Olympic champion admits he has struggled psychologically in the past year due to injury woes but believes he is getting back to his best.

•Kipruto finished fifth in the men's 3000m steeplechase at the AK national championships.

•The world champion was however delighted to have finished his first race in a long time.

•He is eyeing a third world title at this year's World Championship in Oregon, USA. 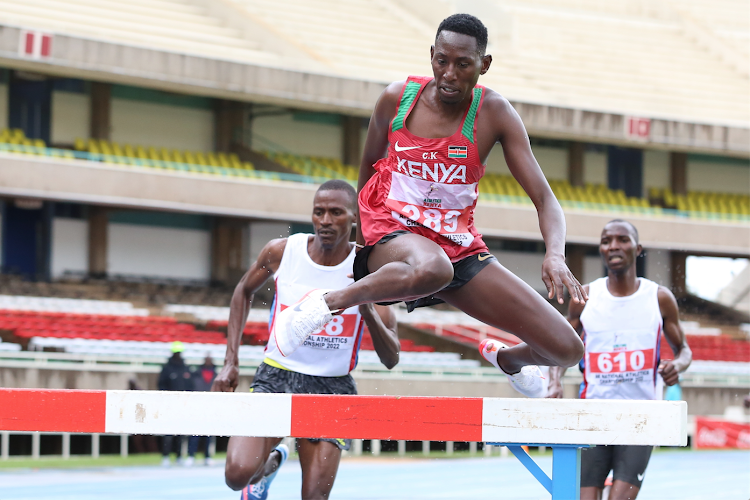 World 3000m steeplechase champion Conseslus Kipruto says a third successive title in Oregon in July will be the best way to erase the memories of a troubled year.

Kipruto admitted he has struggled psychologically, which has led to subpar performances, including an abject race during the national trials for the Tokyo Olympics in June last year.

"I want to run in as many competitions between now and July so that I will be best prepared to defend my title in Oregon. I want the world to know that I am back. The target right now is to improve with every race in which I compete," the 2016 Olympic champion said.

Kipruto was in action at Moi Stadium, Kasarani where he finished fifth in the men's 3000m steeplechase at the Athletics Kenya national Championships, timing 8:32.24.

However, the 2012 World Junior 3000m steeplechase champion was elated at finishing his first race after a very long time.

"It was great to finish the race because previously I had been dropping out after three or four laps. Even during the trials for the Tokyo Olympics, I did not finish the race. Today, when I crossed the finish line, I congratulated and patted myself on the back," he said.

The Commonwealth 3,000m steeplechase champion added: "I want to thank my coach and my training mate, Abraham Kibiwott, for pushing me on even when I don't have the morale to train. They have encouraged me so much."

During the period out of action, Kenya lost its stranglehold on the 3000m steeplechase Olympic crown, which it had held for five decades.

Kipruto said the sight of Moroccan Soufiane El Bakkali lifting his hands across the finish line was like a stab to his heart.

"I was watching the race on TV and it was a sight I could not take in. The steeplechase crown belongs to us and so it hurt to see it go to another country. It hurt even more that I was not there to defend my Olympic title. That is why another world title will swing the momentum back to us," he said.

His next competition will be at the Kip Keino Classic at Moi Stadium, Kasarani on May 7 before the first leg of the Diamond League series in Doha, Qatar, a week later.

"Yes, I will be at Kip Keino Classic as well as in Doha. As I said, for me it is one race at a time. I thank AK for giving me the opportunity to run today and to get up to speed. I had not competed in the semi-finals but was allowed to run in the finals as a way of testing myself," Kipruto said.

Athletics Kenya president Tuwei assured all competitors that the course has been certified as world class and thus any record broken will be ...
Sports
7 months ago

For Ismael Kurui, a Form Two student from Baringo County, 2022 keeps getting better after winning at the Agnes Tirop Memorial Cross Country in ...
Sports
7 months ago

Fireworks at wet Kasarani on final day of national championships

With a ticket to the continental showpiece at stake, everyone gave their all to cross the finish line first despite constant downpour
Sports
7 months ago
Post a comment
by OMONDI ONYATTA
Athletics
30 April 2022 - 05:00
Read The E-Paper