•With a prize money of Ksh6 million, it is the biggest marathon in Africa 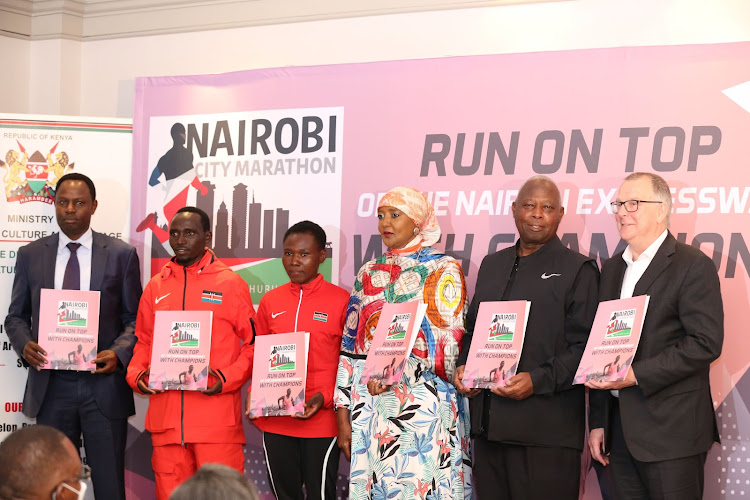 Sports Cabinet Secretary Amina Mohamed has called on Kenyans to make the upcoming Nairobi City Marathon a historic event by turning up in their numbers.

Amina said every Kenyan has a role to play in the inaugural road race, which will be run majorly on the newly-constructed Nairobi Expressway.

“I want to call on all of us to come and run in this event. Even if you run for 1km, it is okay. No one will punish you for dropping out midway. You can also come and cheer the athletes who will be running on that day,” Amina said.

She described the marathon as  the latest evidence of the country's rich heritage as the land of marathoners.

"The event will enhance our global ranking as a top sporting destination. It gives us an opportunity to showcase the wonders of our infrastructural development, that is the Expressway, and to show the scenic beauty," the CS said.

She added:"With elite athletes participating, we hope the marathon will be perfect platform where new talents are unearthed and world records are broken in the glare of millions of viewers."

Amina was speaking at the Norfolk Hotel during the official launch of the marathon, set for May 8 in Nairobi.

Echoing her words was Athletics Kenya president Jack Tuwei who described the marathon as one-of-a-kind in Africa due to the enviromental measures in place and the attractive prize money for winners.

"This marathon is the first one that will make use of air quality sensors to measure air quality during the event. The equipment required for this have already been fixed. Also, with a prize money of $60,000 (Ksh6 million), this is the biggest marathon in Africa," Tuwei said.

Winners of the 42km race will be awarded Ksh6 million as all the other top 19 finishers will receive cash prizes.

The top prize for the 21km and 10km race will be $2,500 and $1,500 with the next five finishers in both categories receiving cash prizes.

There will also be a 5km fun run although no prize will be awarded for the winners.

The start and finish line will be at Nyayo Stadium with the full marathon winding through Jomo Kenyatta International Airport, the CBD and ABC Place in Westlands.

Tuwei assured all competitors that the course has been certified as world class and thus any record broken will be recognised by World Athletics.

Adala won gold in the women’s 100m at Senior Africa Athletics Championships in Cairo, Egypt in 1982.
Sports
7 months ago

The world marathon champion has had a blissful start to life as a warden after a delightful debut on the track at the institution's athletics ...
Sports
7 months ago
Post a comment
by OMONDI ONYATTA
Athletics
29 April 2022 - 05:00
Read The E-Paper