• “I thank God for today’s victory and I thank Athletics Kenya for this opportunity to compete at this championship. I came into this race.

• Indeed, the manner in which he beat the tape at Moi Stadium, Kasarani will have his prospective competitors at the continental showpiece sitting up and noticing. 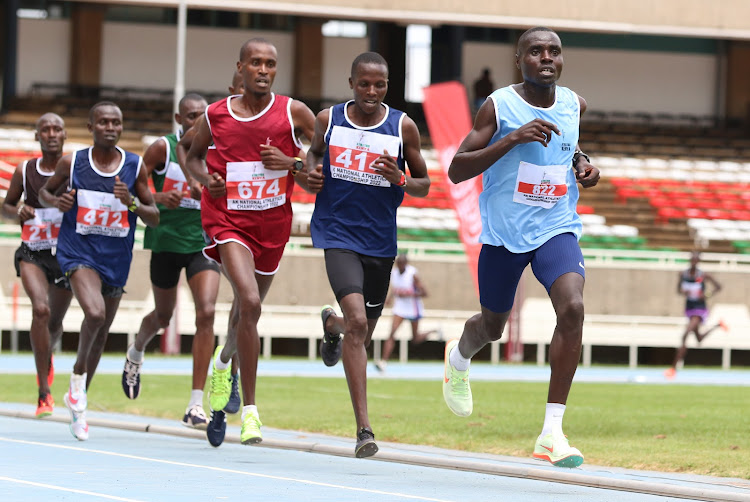 Kenneth Kiprop leads a pack in the men's 10,000m final during the national championships at Moi Stadium
Image: ERICK BARASA

Newly-crowned national 10,000m champion Kenneth Kiprop believes he is well equipped to end the country’s bad luck in the 25-lap race by securing a gold medal at the Senior African Athletics Championship in Reduit, Mauritius.

The Prague Half Marathon champion put in a dominant display at the national trials on Wednesday, timing 28:14.81 to clinch the title.

“I thank God for today’s victory and I thank Athletics Kenya for this opportunity to compete at this championship. I came into this race believing I could win and am happy it came to be. I want to go to Mauritius and make my country proud,” Kiprop said.

For decades now, Kenya has watched helplessly as their bitter rivals and neighbours, Ethiopia and Uganda dominate the 10,000m.

The country’s last Olympic gold in the race came in 1968 when Naftali Temu shone at the Mexico City Olympics.

However, the Lille 10km champion, who will be debuting for Team Kenya on the international stage, believes there is nothing to be worried about.

“I think history counts for nothing. My aim at the African Championship will be to work hard and battle the Ethiopians and Ugandans to the finish line,” he said.

Indeed, the manner in which he beat the tape at Moi Stadium, Kasarani will have his prospective competitors at the continental showpiece sitting up and noticing.

The 25-year-old had for the first 16 laps exchanged the lead with Kimutai and 2016 Olympic 10,000m silver medalist Paul Tanui, the latter eventually fading into oblivion. Afterwards, Kiprop took hold of the lead and then widened the gap between him and the chasing pack to 40m. In the penultimate lap, the gap had increased to 80m and it was not a matter of if but when he would cross the finish line.

Reflecting on his performance, Kiprop stressed on the importance of self-belief.

“In this kind of race, only the strongest survive. I knew that the way to win today would be to be mentally strong and be able to withhold till the end,” he said. “I was looking forward to competing against Kibiwott Kandie (former world half marathon record holder) since I am yet to run against him.”

In other finals of the day, Priscilla Tabunda led a KDF clean sweep in the women’s 100m hurdles to book her ticket to Mauritius.

The three-day championship come to an end on Thursday with the naming of the final team.

'Coasterians' ready to shine at national championships in Nairobi

The event will double up as trials for the Senior Africa Athletics Championship in Reduit, Mauritius in June and the athletes are optimistic of good ...
Sports
9 months ago

The Nagoya Women's Marathon champion joined Kenya Prisons a month ago and made a successful debut in the 5000m and 10,000m
Sports
9 months ago
Post a comment
by OMONDI ONYATTA
Athletics
28 April 2022 - 05:00
Read The E-Paper